After a month in this lovely Mediterranean climate, I can safely say I’m glad to be here. 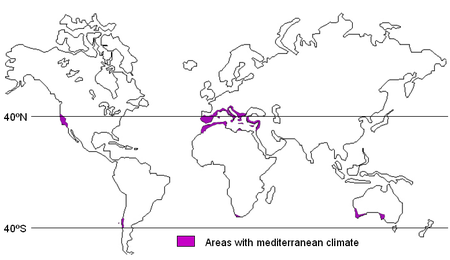 Unlike the other CBE summer fellows in Palau, Papua New Guinea, and Bali (despite researching these areas intensely) I am in one of the five mediterranean climates. From the map, you can see that Chile, South Africa, Australia, and, of course, the Mediterranean all share the same climate. This is a product of the cold waters being carried by ocean currents towards the shore. This “dry-summer subtropical” climate has several important impacts.

First, the Mediterranean forests, woodlands, and scrub biome that is associated with the climate zones. These biomes have a massive amount of biodiversity of habitats and species. Collectively, these ecoregions harbor 10% of the Earth’s plant species. This is associated with the dry-summers and rainy winters, as well as the common feature of fires as a mode of change. In Monterey, fog and clouds are a distinctive feature of the climate as well.

Second, the combination of ocean currents and runoff from the rich vegetation on land results in an influx of jellyfish. Off the coast of California, brown nettle jellyfish are the most prominent, particularly during the fall months. And where there are jellyfish, there are leatherback sea turtles! Leatherbacks can be found all over the world, and the only distinguishing figures are the oceans, nesting beaches, and foraging areas the subspecies utilize.

Even though I’m not in Peru, Denmark, Hong Kong, Ireland, Malta, or the Middle East, I get to spend my summer in the beautiful Monterey. And once the summer is over and the jellyfish begin to spawn, I’ll be lucky enough to see a leatherback up close and personal on the third day of the Pacific Leatherback Sea Turtle Conservation Summit!