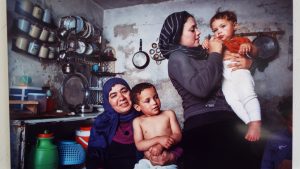 Mariam, 43, center, holds her grandson Ali, 4, to the right is her daughter Ra’ida, 13, holding her niece, also Mariam. I, in the kitchen in Mafraq, Jordan. Along with other family members, they fled Aleppo, Syria, in 2012 after Mariam’s daughter, Fatimah, suffered severe burns on nearly half her body. Fatimah was standing next to her mother as she was cooking on the stove when their neighboring mosque was bombed and crashed into their home, splattering hot cooking oil on Fatimah. Fatimah was 5 years old at the time. Seventeen family members were living in a two-room house for over two years in Mafraq.