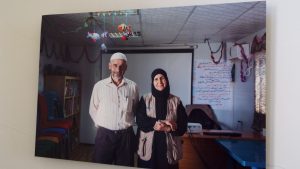 Um Shadee, 50, on the right, Abu Shadee, 52, to her left, and their family fled Homs, Syria, in 2015. They escaped bombing in their neighborhood so quickly that they brought nothing with them but the clothes on their backs. Two of their seven children are with them now, but the other five are married and remain in Syria. They are in the caravan where Um Shadee teaches knitting to girls in one of the Mercy Corps’ adolescent-friendly spaces. Azraq Camp for Syrian Refugees.