During Richard Matthew’s talk I found a lot of the content we covered, particularly pertaining to inequality and wealth disparity, to be a good way of setting up the discussions we had with Richard Rubenstein about the effects of systematic violence. For example, Dr Matthew’s point that if the bottom 50% of the world’s population liquidated all their assets, they still would not be able to afford a night in a hotel in Monterey, CA. I found his frame of analysis when describing the trends of the 20th Century, and the goals in the 2nd half — to prevent another world war to be an effective way of understanding the geopolitical events and relationships post-1945.  Obviously these goals have now changed drastically, as have the challenges – and these two areas are not necessarily aligned. While we are all pretty well-versed on the challenges of climate change – the effects that are already changing our weather patterns, ecosystems and resources – I had never given much thought to the concept of what environmental feedback the planet might have.

How is the planet going to respond to these changes? Will there be positive effects which actually stimulate life, foster great equality amongst human inhabitants and push the boundaries of human ingenuity? Only time will tell. And just because there is the potential for our planet to have some positive responses to climate change, and some positive adaptations, the science still paints a pretty dim view of the situation, which further highlights the need for action, awareness and preventative measures. I think the work Dr. Matthew’s has been involved in with regards to including the environment as an aspect of peace-building is important, but I had been unaware how important it actually is. He referenced that since 1960, 40% of all internal conflicts have been linked to natural resources. Similarly, since 1990, 18 civil wars have been financed by illegal exploitation of natural resources. I think there is a lot of hype in the media about the future of war being related to resources and their scarcity, but as Dr. Matthew’s explained, this has been going on for decades. The positive thing about it being an ‘old’ problem, is that sustained systemic and grassroots efforts to combat these damages is clearly underway, as demonstrated by Richard’s work and career.

Something which Richard said towards the end of his lecture, I found to be particularly relevant to the SPP as we all look ahead to working on our projects with our various organisations. When talking about global populations, he said “there is an equality of ingenuity, but an inequality of financial capacities.” I thought this was a profound and important statement as we all begin working on different projects for organisations who are working to advance the rights or interests of different peoples around the world. It highlights the need for respect and open-mindedness when outsiders are attempting to help facilitate or mediate solutions. 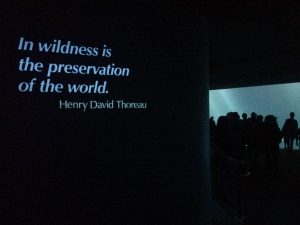