The lecture we had on storytelling  was very compelling for me, especially given that I had just finished my internship at the 1947 Partition Archive at the University of Berkeley in documenting peoples stories who had first hand experienced the Partition of India and Pakistan as an oral history archivist , and especially  more nuanced understanding on how perspective in narration shifts when targeted audiences change and the immense responsibility and delicacy with which that translation needs to be dealt with in converting first hand stories to increase the demographic audience.  The idea behind the initiation of the organization was to create a space for the communities affected by the Partition to talk about their stories in their voice, hence I see it more as stories letting being told by the people who feel ready to share personal stories on being affected by their history that continue to shapes our present.

The story of a Partition survivor: her voice- written and spoken. 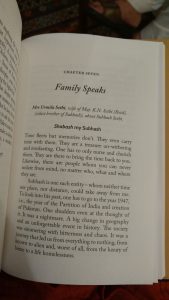 In her interview the interviewee mentioned Mr. Saddat Hasan Manto’s play called Toba Tek Singh and alluded to how the Partition, as claimed by Mr. Manto and also depicted in his play wrecked havoc when there should have been none, and how ironically the Partition came about at a time causing division when none should have existed and how tragically people’s lives, identities, and the social and cultural place that they were a part of became shattered, fragmented concepts that we are still trying to make sense of and piece together. In this picture the interviewee talks about her experience at the time of the Partition as documented by her husband about his feelings and struggles in coming to terms with accepting how the decision made overnight by drawing a line was something that became a terrible tragedy and reality that people had to unexpectedly accept and are still facing the consequences of/ is manifested itself in the form of  the estranged relations between India and Pakistan that continue to exist.

However, one personal struggle that I have with this method is the power that language has in re-shaping and re-enforcing certain norms that continue to exist and the very purpose of creating space could be dangerous in how the use of terms in othering  could serve as a way to further solidify positionality in people’s perspectives and places in the context of culture and power dynamics and further perpetrate extremes.
Learning about the approach that this form of peace building adopts in having a community based participatory aspect incorporated in its aim for me and learning about the 4 Cs in the form of Connection, Context, Change and Conclusions, made me reflect, yet again, on the subtelty of dealing with such forms of documenting people’s lives.  Furthermore, because of the testimonial approach that this method while serving a twofold purpose of providing a platform for generating a stronger impact on the community in order to facilitate members in understanding violence and oppression through the voices of the victims and dismantling the earlier topics of hegemony and structural violence by Galtung also opens up avenues for mobilizing people through open dialogue , discussion and communication in how to collectively speak truth to power.

Overall his session and the impact that storytelling, voice and language has in conveying stories to people was very important and doing the activity of talking about how we found our calling helped us understand how we are all part of each others storys and why we tell stories is to not feel alone.