During our visit to the Salinas Valley State Prison, we got to meet some of the prisoners at level 2. Some of the inmates are part of a group working on reconciliation and helping each other to not return back to jail after being released. They started by giving us a presentation about the survey they did and they used the survey to tell us some of their personal stories. The results of the survey are scary. More than 70% of the prisoners who participated were first in incarceration between the age of 9 to 19. And around 30% were incarcerated between the age of 9 and 12. Imagine the change that can happen if these inmates got help mentally and financially, got guidance when they were first jailed. Not only they were left to do the same crimes again, but according to their stories, the absence of a father and role models led to them joining a gang. Unfortunately, their children are now also at risk of joining gangs because of the absence of their fathers and the lack of support. Some of the prisoners said that their children started going to that direction and that they can’t help them to find their way. That is why organizations and groups like CASP trying to stop the youth from joining a gang are essential to reduce gangs violence. 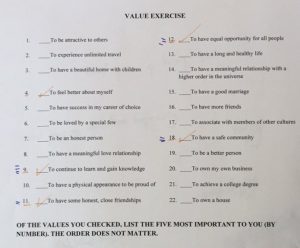 I was impressed by the name of the survey “common ground”. It is a perfect name for the situation in the jail with the prisoners split over race and gang lines. It makes the prisoners see that the others are also the result of almost exactly similar circumstances. It humanizes the prisoners. Yesterday’s speaker from the Kingian Non-Violence organization used a similar approach. They organized an activity of choosing your values to show us how humans have a big common ground and that focusing on that common ground is the way to achieve peaceful change.