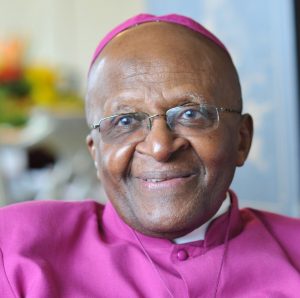 Tuesday morning sessions with Prof. Joe Bock addressed The Positive Role of Religion in Peacebuilding. During the class, Prof. Bock asked us in our small working groups what we saw as some of the positive impacts of religion on peacebuilding and the negative impacts. Several of the groups noted that Desmond Tutu was a religious person who had a positive impact. Some spoke of his work around naming apartheid as a heresy and others spoke of his work with the Truth and Reconciliation Commission.

I first encountered Desmond Tutu in books. In 1984 I read the book, Apartheid is a Heresy by John W. DeGruchy and Charles Villa-Vicencio. This book included a chapters written by Archbishop Tutu and other South African Christians and focused on the historical, theological, moral and practical aspects of apartheid. This book opened my eyes to the challenging situation in South Africa and introduced me to Desmond Tutu. Archbishop Desmond Tutu is an Anglican like me. He was the Archbishop of Cape Town and the Primate (head of the church) of the Anglican Church of South Africa.

Years later, I was introduced to his work again when I studied the work of the Truth and Reconciliation Commission. As Prof. Bock noted today, it is important for some trauma survivors to be able to tell their stories and to feel heard. Tutu and his colleagues took this one step further in that the Truth and Reconciliation Commission (TRC), a court-like body assembled in South Africa after the end of Apartheid, created space for anyone who felt they had been a victim of violence to come forward and have their stories heard by the TRC. I was in awe of the courage of the victims and perpetuators of violence to share their stories.

So many things inspire me about Desmond Tutu. He is an passionate activist that works for peace and justice in his local community and globally. And he led this witness clearly grounded in his faith in God. Other leaders who were named on Tuesday as religious leaders who have had a positive impact on peace work included Martin Luther King, Jr ( who we also spoke about Friday night when we spoke about Kingian Nonviolence) and Pope Francis ( I was reminded of his encyclical on the environment on Tuesday evening as we spoke about water justice). These two leaders in peace and justice work are also grounded in their faith in God. I also see this kind of witness in the Presiding Bishop of The Episcopal Church. Presiding Bishop Micheal Curry grounds his peace and justice work clearly in what he calls The Jesus Movement. From this grounding he has spoken eloquently on the rights of immigrants and refugees in the United Sates and on the rights of transgender persons. He speaks from a place of seeking peace without compromising justice. His witness is inspiring!

I often look for role models who inspire me in my work. On Tuesday I was reminded of 4 men who I can look to as role models when I think of engaging in peacebuilding work from the faith tradition. I see one of my tasks going forward is to learn more about these men. My faith inspires and motivates me to be a peacebuilder. Knowing more about these leaders and there stories, their faith journeys, their challenges and their joys can be a touchstone for me to connect more deeply with this work.