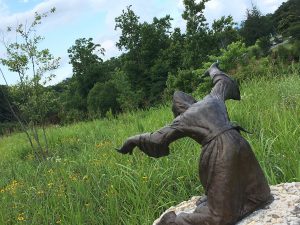 Monday was a full day revolving around the topic of gender. We explored gender, sex, identity and cultural roles. Dr. Sujeta Moorti was thorough and careful in exploring the topic, helping each of us consider it through our own experience and cultural lens. In the United States we experience this as an emerging conversation. Julia Mosse, author of “What is Gender?” suggests we think of gender as we think about the development of language; something that is dynamic, fluid, on a continuum, and as a spectrum.

Of course, this is not a cultural conversation for most women on the planet. To even be recognized as fully human is a daily concern. Human rights (eg., the right not be tortured, to have food and shelter – those things for which the state is responsible to the individual) and human security (more communal concerns such as sustainable food supply for a village) are on a given day how many women spend their energy.

Not until the Arusha Peace Agreement (1993), which among other things ended the three year civil war in Rwanda, were women’s rights were provided for in any peace agreement in the world. This was especially important as women returned to Burundi from refugee host countries. While little has been instituted toward the equal rights outlined in the agreement, ground was made in the articulation of the basic human rights of women. It is important to note that no women were included at the table in forging the conditions of the Peace accord. There is so far to go.

Dr. Moorti encouraged us to look toward Liberia and Rwanda as current leaders in making progress toward more inclusion of women in positions of power. Notably, the US is lagging in terms of women in political positions of power, and still is one of the six countries in the world who has not signed onto CEDAW, The Convention on the Elimination of Discrimination Against Women, passed by the United Nations General Assembly in 1979. We join Iran, Palau, Somalia, Sudan, and Tonga in this distinction.