The Role of Gender in Peacebuilding

Society has always placed obstacles in the way of women and minority groups in every single aspect of life. It is not easy to over come these obstacles but it is something that must be faced by millions of people today. When we spoke to the Police Chief of Salinas, she said something that struck me; she is not a female police chief, she is simply the police chief. We tend to either ignore gender or how we presents ourselves as masculine or feminine or overly emphasize it through this method of ignoring it. It is a hard route to navigate when so much in society is made to be either masculine or feminine, when I believe and agree with Professor Moorti that gender is a spectrum, but society is the one who built and continues to perceive it in a way that is simply binary.

We talked about this extensively in our session with Sujata Moorti, and we discussed how we indicate our gender to others, and how that indication may be different in different cultures. We also spoke about the idea of how capitalism and the consumerist nature of society takes advantage of this ‘perceived’ binary to manufacture products that must either be feminine or masculine to cater to what has been developed as extreme restrictions on what it means to be a woman or a man (particularly in western societies). At times it can become absurd. For example this BIC for her pen: 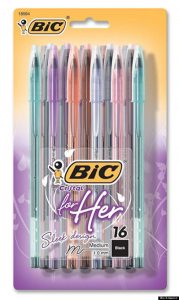 These ways of gendering almost every aspect of our lives also has a way of gendering the nature of how we tend to deal with conflict. We discussed this in the way in which men and women tend to be militarized in different fashions based on masculinity and feminity, and how war or conflict tends to take away or add to these perceived ideals. I found this the most interesting out of what we discussed because perhaps if there were not these gendered ideals involved in conflict of how men express bravado or being macho , or how women tend to be pictured as being subdued or not dominant, the presence of conflict might be lessened. I believe these divisions constructed in society of how gender must be interpreted are the cause of many other divisions and conflicts in general.