The first day of the Summer Peacebuilding Program focused on the role that media and the arts can play in the process of peacebuilding. It began with the reflective and creative tool of freewriting, with prompts about our passions and the most essential components contributing to our desire to do peacebuilding. In writing a clear path my life has taken towards peacebuilding in 5 minutes (covering significant experiences that instilled or strengthened my core values), I felt surer of going into this field than ever before!

Lindsey Doyle, Co-Founder of Media and Arts for Peace, talked about the need for people to see progress in order to be inspired or maintain momentum, emphasizing the importance of creative means to move people that can be shared around the world. One point that stood out from our discussion was that art is an expression of creativity, and in order to navigate through the complex and multifaceted nature of conflicts, creativity is required. I hadn’t previously considered political cartoons to be “peacebuilding,” but I realized that they certainly can be used that to aid in the process of building peace, e.g. challenging common narratives that overlook what really matters. One great example we discussed was of the Palestinian-Syrian cartoonist, Hani Abbas, who serves as an example of art that can evoke emotions useful for transformation. 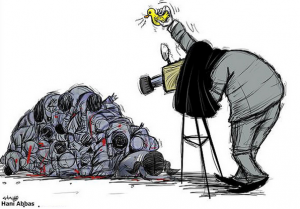 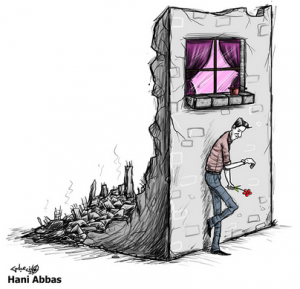 Another useful application of the arts is help heal from trauma. This was something I’ve witnessed song, rap, storytelling, and dance all play a part in the healing process after a tragic event that impacted a community I previously worked with. Additionally, I found myself drawn back to studies of modern forms of resistance in China while reading of movement performance as a means of resistance. This was a creative protest that involved a lot of people organizing online to walk very slowly past a government building at a certain time to show resistance after a recent attack from police on a nonviolent protest. This ingenious method allowed for an expression of unrest with relative safety in a country that had just shown severe consequences to more conventional protests and demonstrations. Reflecting on how I’ve already seen and benefited from the usefulness of the arts for peace and processing emotions gives me confidence I’ll be able to use these kinds of creative means constructively in the future.