Though I’m not sure these magnificent and compassionate creatures whom I’ve grown to love & respect entirely deserve the comparison, it’s probably a safe bet to say that we’re all familiar with the metaphorical idiom: “the elephant in the room.” 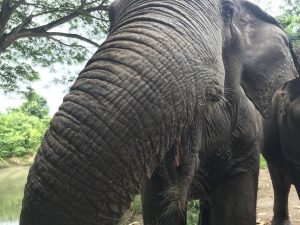 As it turns out, not addressing sizable issues of palpable tension staring us blatantly in the face (also known as “the elephant in the room”), exercising apparent apathy, or turning a blind eye for reasons of wanting to be “polite” by not bringing clashing matters…is actually, in and of itself, an act of violence.  I had never thought about it this way before – I knew that I never have liked this concept of pretending that everything was fine when it was not, but have never previously considered this glazing over, sort of “Pleasantville” type comportment, to be blatant and intentional violence.  Previously unfamiliar with “Kingian Nonviolence,” I found our discussion regarding Dr. Martin Luther King (MLK) Jr.’s philosophy of “nonviolence” to be highly interesting and extremely thought-provoking.  Dr. MLK Jr. understood that “nonviolence” often requires disruption, something that can make Western families, stereotypically concerned with niceties at parties, cringe and cause their eyes to twitch in ways that perpetuates this avoidance of topics provoking disruptive conversation, however enriching and healing it essentially may be…and maybe at the expense of those who need to be recognized or heard.  This gesture of “nicety” can do more harm than good.  Why do we shy away from conflict?  I myself in the past consider myself an extremely conflict-averse person, preferring to be a pushover than to displease others…to my own detriment or at the expense of my own happiness.  Why is conflict not inherently seen as an opportunity for an improved situation, understanding, behavior, or attitude?  Conflict doesn’t necessarily mean fighting and yelling; as we discussed during our session, fighting and yelling are signs that a conflict has been mismanaged.  If we consider anger to be a powerful spark, but not fuel, emotions can be properly channeled in the most productive direction. 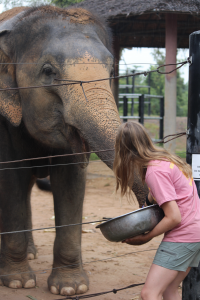 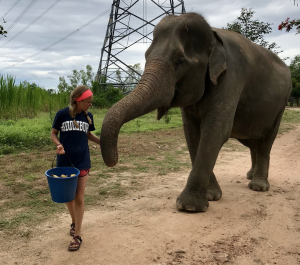 “Negative Peace,” or the quiet & calm state that comes at the expense of justice and sweeps issues under the rug, can be mistaken for “Positive Peace,” better known as justice for all, working to end structural violence, the stealthy violence that runs through the veins of our foundational societal systems and perpetuates the lifeblood of inequality.  Maybe people are afraid of making issues personal.  However, if we attack the forces of evil instead of the people doing the evil things, suddenly topics become much easier to discuss.  Storytelling is a powerful tool; and if we understand people’s stories who are willing to share, we can empathize and better comprehend motivations, which are not the same as excuses.  We are intertwined.  Recently having spent some time in Thailand coincidentally with elephants, I have become interested in Buddhism – I believe the essence of the following quote is attributed to the aforementioned teachings: “Holding onto hatred is like drinking poison and expecting the other person to die.”  Sometimes we are forced to let things go, simply because they are heavy.  If we cannot discuss the large elephant in the room & have those crucial conversations, how can we ever truly resolve anything in a meaningful way?