“…nonviolent, but militant, and as dramatic, as dislocative, as disruptive, as attention-getting as the riots.” These were Dr. Martin Luther King Jr.’s words to describe the movement as part of his Poor People’s Campaign—his final endeavor as he was assassinated during it. I have often taken inspiration from MLK Jr., especially once I stepped away from the white-washed depiction of him that dominate many school curriculums during Black History Month. Rather than a paraphrased Dr. King who only spoke of racial harmony, ideal society, and nonviolence without much detail, I began to learn more of the real King who was very clear about what needed to be done and how to grab attention to ensure the rest of the country knew what racial discrimination and modern-day remnants of slavery looked like for people of color. Dr. King was fierce in his condemnation of the injustices he saw, and summed up the type of action it takes to effect lasting change with these words:

In conversation with Kazu Haga, Founder of the East Point Peace Academy and Kingian nonviolence advocate, I felt so inspired in viewing nonviolence is not only transformative, but also as a concept that often requires disruption. In this sense, it was similar to the nonviolent philosophy in which Gandhi lived by and I’d learned of before, but Kazu explained in detail the nuances of King’s perspective on nonviolence. On building the “beloved community,” King said that it takes fierce vulnerability, which is expressing your emotion by saying how things have hurt you, rather than projecting your hurt onto others in words or action. This difficult step speaks to King’s first principle of nonviolence, which is that it is a way of life for courageous people. The specific notion of courage that I will strive to apply in my work as a peacebuilder, is one that Brené Brown speaks well to: 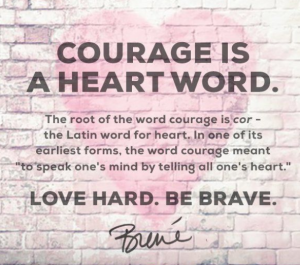