Throughout the week, after conversations on religion’s influence on conflict, the impact of water on the world and creative solutions to scarcity, the importance of understanding economic factors that drive conflicts, how one might go about evaluating conflicts considering the nuanced nature they have, and several others. This speaks to the variety of people it takes to actually build peace in any community or larger society. It cannot be a single person, no matter how incredible they may be. I often think of Nelson Mandela and Archbishop Desmond Tutu when thinking of the concept of reconciliation because of the role they played particularly in the years leading up to South Africa’s first democratic elections in 1994 and the following decade or so. Though both of them were incredible, they’re still human, which means that their efforts were in conjunction with countless others, and that they weren’t without their faults; there are many issues related to “reconciliation” in South Africa with some upset with the lack of accountability in the Truth and Reconciliation Commission and economic disparity along racial lines. Reconciliation is not easy for any country, and it cannot be actualized by those at the top alone. As John Paul Lederach has commented on, saying that it takes people working from the grassroots level to be building peace in conjunction with those at the top, which is a process often facilitated by middle-level institutions. 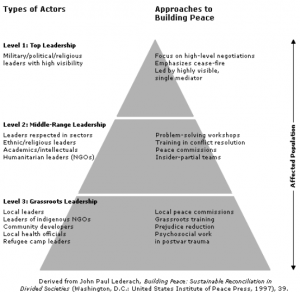 We spend most of one day this week with Dr. Bridget Moix discussing this process of coordination between local peacebuilders and international efforts aimed at building peace. Dr. Moix works at Peace Direct, an organization that believes that everywhere that has conflict also has local peacebuilders and that these locals often have ideas of what it takes to respond to and prevent conflict. I’ve been drawn to this view of peacebuilding in seeing many problems with conventional models of international intervention in conflicts, including the top-down nature, colonial roots, formulaic solutions, etc. Some concepts particularly interesting that came out of Dr. Moix’s research were that peace agency, or one’s ability and desire to become a peacebuilder in some sense, is more about human connection than it is about one person’s choice. This speaks to the concept of “relational responsibility,” where one person’s closeness to those impacted by conflict or closeness to conflict themselves implores them to work toward resolving that conflict. This means anyone can be a peacebuilder! The kind of peace that can inspire peace agency, impacts the “everyday,” is driven by local efforts, and supported by larger scale institutions is a peace that I believe can sustain and reach all levels of society.