Today’s topic was incarceration in the United States, with a focus on gang violence. It is impossible for me to read or talk about gang violence in the United States without thinking back to my two years of service in two Detroit schools because of the impact this kind of violence had on students and the larger community. The high school I served at was within what’s known as Detroit’s “red zone” because of the prevalence of Seven Mile Bloods, a gang that included some of my students and several of their family members. There were bullet holes in classrooms in this high school, and at each school I served at, there was at least one day that I heard gunshots very clearly within a few blocks of the school grounds. One student showed me the scar from where a bullet passed through his calf muscle, adding that he was shooting at the person who shot him in the middle of the street. Another of my students brought a gun to school, in relation to an insult to his gang by another student. There was a gang-related deeply traumatic event that resulted in the death of several students and grief of the entire community; a part of my service I will never forget. I’d never seen communal emotion so raw and full of pain. 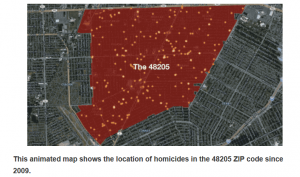 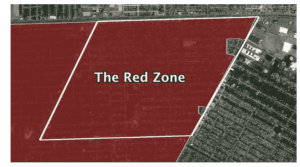 (the neighborhood within Detroit where I served and, at the right hand corner, “The Red Zone”)

The thing about having guns and gangs around you all the time is that it’s normalized, but still impacts your mental health negatively because of stress, fear, distrust, trauma, etc. To add to this, children are expected to learn in schools that are often severely outdated; sometimes falling apart, full of mold, infested with cockroaches, and with unsafe drinking fountains. I was at schools that had food programs—one included breakfast, lunch, and dinner—because a number of students get their only meals at school. Hunger was a very real issue, and in a food desert, like much of Detroit is, that means cheap snack foods, sugary drinks, and fast food dominate the energy many of my students ran on. An additional factor in this is the low levels of literacy in the city, to the point where students in schools around the city testified about their conditions to the Michigan Supreme Court only to be denied the “right to literacy” they fought for. I say all of this to show why it was so easy for my students to “fall off” and lose interest in education because they didn’t see a future that brings them out of the life they know. However, this doesn’t mean they don’t have dreams. I had a number of students talk about their future life of dealing drugs and making money in a romanticized version of gang life, then speak from their heart and tell me about dreams of becoming an engineer because they love math.

What I’ve described in the above paragraphs is the school-to-prison pipeline that is pervasive in low-income communities of color. These students live and learn in an environment most people couldn’t imagine and would be especially shocked to hear that this is the case in the United States. All of the factors combine to make school less effective and crime more appealing, and when these communities are heavily policed, which is almost always the case, it is not difficult to find oneself behind bars. Seeing this happen to several of my students was absolutely crushing, and made me admire the teachers, administrators, and police officers who really looked out for these kids because they lived in that environment too and see a potential in them that they don’t want wasted in a gang. What I learned in this environment was that it takes a village to raise a child, and a village to keep them. There are systemic changes that need to be made for us to see a significant change in gang violence, but that change starts with showing gang members support, love, and acceptance—the motivations of many for joining a gang in the first place. It takes lots of local peacebuilders working in conjunction.

I am aware of the reputation that Detroit has within Michigan, the US, and the world. It is not a good reputation, but it is also a magnificent and beautiful city with a rich—and often times troubled—history. Due to this reputation, I have developed a habit of never speaking of the issues facing the city without talking about something good happening at the local level. This “something good” is the Live In Peace (L.I.P.) Movement that was started by a pastor—Pastor Mo—who believes that too many young people are living so they may rest in peace, and he wants them to know what its like to live in peace. He and his crew go out in the city to liquor stores, gas stations, popular Detroit restaurants, and high schools to promote messages of peace. They also sometimes serve as a “peace force” when there is a community gathering that might cause people to bring guns with the intent to use them, and they use their presence—not guns—as a defense. I’ve seen this peaceful force at work while at the funeral for the students who died in the tragic event I mentioned earlier, and them being there with their shirts that say, “Live In Peace,” and the corresponding message they brought really did make a difference. This was not a top-down directive that resulted in some superficial change, but a grassroots effort that is playing the long-game and trying to reach out to kids before they join a gang or soon after. This is one example of a community leader responding to his city’s needs with a solution that the city actually needs. 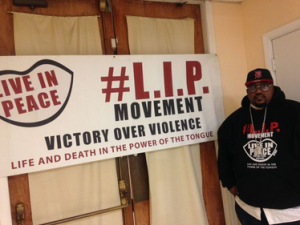 Today, we had the privilege of speaking with Willie Stokes, who’s dedicated his life’s mission to preventing kids from joining or staying in gangs in the Salinas Valley. His ability to draw from personal experience and the understanding of what it takes to join a gang gives him a connection that he can build from to form relationships that allow a new perspective to work its way through the layers of defensiveness that gang members often have. This method by no means guarantees a good outcome, but there are positive effects and success stories that highlight the transformative power of this kind of work. I was inspired after hearing Willie’s story and learning of the incredible work he is engaged in now. The question I’m left with is how can we make these efforts more common practice/institutionalize them? For now, I will hope that their success will speak for itself and in 20-30 years people will be wondering why anyone ever “gave up” on gang members, labeling them inherently bad and incapable of change.