This past week has generated a lot of reflection on where I see myself in the field of peacebuilding. While visiting two prisons in the Salinas Valley, I was able to add complexity to my understanding of compassion and of empathy. I have had very critical views of the criminal justice system, and especially the role of incarceration, as I have seen and read of numerous ways that it actually prevents a chance at rehabilitation. This view was challenged by the Prison staff who showed us their facility and some of the programs they have that allow for educational enhancement and substance abuse counseling, which I believe are often times necessary if there is to be a chance at reintegration. At the same time, the physical structure of the prison, and the separation of prisoners based on the severity of their crimes can reinforce violence, and could be partially responsible for some of the violence within the prison. I was able to empathize with those controlling the prison and those within it, though this was not because I overlooked the fact that many are working as guards to get a check, and many prisoners did end up there because of crimes they committed–some crimes that could drastically alter my ability to have compassion for them if I had know. Instead, I saw compassion as an understanding that no one is static, and empathy as the ability to see everyone as human. 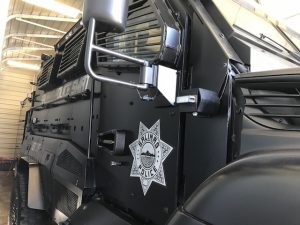 This was important for me to keep in mind as we visited the Salinas Police Department, as well. I have always believed that the work police officers do is important, and that they can be wonderful community leaders, but as I’ve learned more about systemic injustice and how it can manifest at the hands of police, I am much more skeptical rather than trusting. This also relates to my opposition to the militarization of police departments, which I encountered in Salinas. This huge armored vehicle seems as if it belongs in a war zone, not being driven by those meant to “protect and serve” the residents of Salinas. However, speaking to the officers who allowed us to view this vehicle, I was able to empathize with why it was there and why the SWAT team used it up to 50 times a year. Hearing them say that this allows them to do certain things like enter the home of gang members who would shoot on site without risking an officers life, I understood the fear I would have as a cop without a shield from the bullets. Without being able to empathize with something I opposed, I would not be as effective in my questions, nor in viewing things fairly. The concept of fairness was on that we discussed in a debrief after visiting the prisons, as it is preferred to false notions that we can be objective or neutral. It is a balance of taking a stand to match your values, but understanding that your values are not universal and may need to be complimented with the perspective of those in conflict. 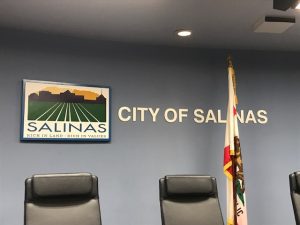 While in Salinas, we were able to meet with several members of the Community Alliance for Safety and Peace, who are committed to preventing further youth violence, and addressing their community’s needs as they stand. They discussed several methods for how they are trying to shift the community’s mentality from retributive to restorative justice, including having some of these practices work their way into schools, working with young people outside of schools to provide alternatives to joining gangs, working with parents and providing historical facts that have exacerbated violence and concentrated it in communities of color, and, perhaps most interestingly, utilizing leadership that can focus on injustice without responding from a place of fear and anger. CASP members added to that last point by saying that this leadership can’t come from those in government, so they sought local organizations with the social capital and capacity for communal leadership to take on this role. At the same time, members of CASP that are involved with city and county government agencies are providing training on “governing for racial equity” so that the local efforts can be complimented with changes in actual policy and governance. This kind of collaborative work is what is needed to address the complexity and ambiguity that often characterizes the issues peacebuilders attempt to address, and the ability to let go of ego and allow those most qualified and able to relate to a community’s needs to lead is something I hope to see in more institutions aimed at peacebuilding.