We were able to gain a geographer’s perspective on peacebuilding from Dr. Guntram Herb, who built on Johon Gaultung’s notion of peacebuilding as creating self-supporting structures that remove causes of war. He did so with a focus on scale, place, and space. With any conflict it is important to view things from multiple angles, and scale speaks to that, emphasizing that if you only look at it from one perspective, you will either not have the detail to see important nuances and intricacies, or you will have some things beyond what you can see from one position. For a peacebuilder, this can involve a stakeholder analysis and view of what the problems are from each persons perspective, then try to synthesize all of this into your vision for transformation. “Place” is also important to consider as a peacebuilder. A sense of place that people feel when they have emotions and meaning tied to a location–an example being Jerusalem being a holy city for numerous faiths, and a site of contention as a result. This highlights an important aspect of place, which is that it is not about something with a clear inside and outside, but rather a process. 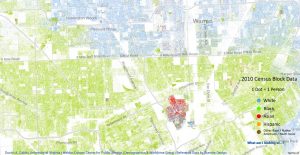 A third and crucial element of geography and peacebuilding is space. Space can be topographical/measurable, as is typically thought of, but there is also relative and perceived space. Relative space being based on linkages, so, for example, I will feel like I am very far from home if traffic is heavy and I’m exhausted, even if I am only a few miles away; or I would feel that swimming across a pool is easy, but not if the pool had great white sharks and I had a cut on my leg. An example of perceived space would be the difference a space holds in the day compared with at night, which can then have more of an impact based on ones identities. In its essence, space is the “meeting place where relations interweave and intersect.” Space can therefore be used to control–such as segregation practices in places like the United States and South Africa, or forced relocations of Uighurs in China or Adivasis in India. In relation to segregation, space can act as a barrier–this led me to immediately think of 8 Mile Road, which separates Detroit from wealthier cities and has historically been a racial line that used to be strictly enforced to keep black people south of it, within Detroit city limits. However, space can also be crafted as a facilitator of peace, and this can happen in everyday spaces where people interact. 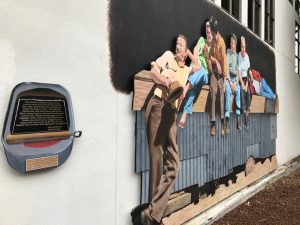 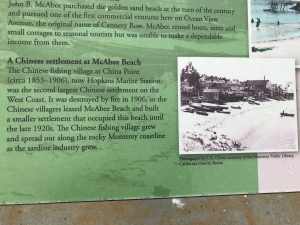 Discussing this led to a video project, where I collaborated with Travis to tell the story of the Chinese immigrants who started Monterey Bay’s fishing industry and California’s squid fishery after establishing a village on Point Alones in Pacific Grove. This story is mentioned in the signs along the Coastal Recreation Trail, but not in much detail, and especially without detail on the fire that burnt the entire village to the ground in 1906. The success of these immigrants from China was soon envied by white residents of the peninsula, who, reacted with direct and structural violence. They enacted local laws that prevented fishing during the day for Chinese immigrants, constantly dehumanized them, and eventually burnt the village to the ground, laughing as the Chinese residents fled. Although we aren’t able to “prove” this, many similar Chinese villages along the coast suffered the same fate after discrimination from whites. The story we told of this event related to modern-day Monterey, which is still mostly white, and reveres people like John Steinbeck, author of Cannery Row. On the Recreation Trail, this Steinbeck quote next to a mural of white people sitting together stands out, speaking of the working people as they leave: “the dripping, smelly, tired Wops and Chinamen and Polaks, men and women, straggle out and droop their ways up the hill into the town and Cannery Row becomes itself again-quiet and magical.” The notion of the “magic” only being present when the poor and unwanted leave is seen today in the police sweeps that push homeless people away from streets in Downtown Monterey and away from everyday spaces where they could meet the eyes of tourists. The main point we were driving at was that Monterey’s Rec. Trail could be transformed from an everyday space that overlooks and essentially erases history–leading us to repeat it, into one that facilitates dialogue around the true history of the success of one of the major industries for the Bay. This assignment and our discussions with Dr. Herb were very enlightening on how I could utilize space as a peacebuilder!