The first day of our last week of the Summer Peacebuilding Program started with Dr. Joseph G. Bock on health challenges and peacebuilding, where we discussed violence as a disease. Violence is considered in this framework because, like an infectious disease in populations, it will form clusters, has the ability to spread—usually in waves, and it involves transmission from human to human. One benefit to addressing violence as a disease rather than a moral issue is that moral issues have various interpretations and sources of moral authority. By addressing it as a disease, you can address it systematically; going for the larger clusters of violence, preventing it from spreading, and as a result, diminish the likelihood of further transmission. Transmission can be accomplished by witnessing violence or having violence enacted upon you, and there is plenty of evidence to show that those who’ve experience violence in one of these two ways are more prone to reproduce it.

One example of addressing violence as a disease was in Chicago’s Ceasefire Program, now referred to as CURE Violence. Dr. Bock spoke of this program and the difference it had to Operation Ceasefire that started in New York. The Operation Ceasefire is a more punitive approach, coming from a criminal justice perspective on violence prevention that requires multiple levels of government coordination. On the other hand, CURE Violence is a more restorative approach, addressing violence as a public health concern, seeking to interrupt transmission, identify and change the thinking of highest potential transmissions, and change group norms. 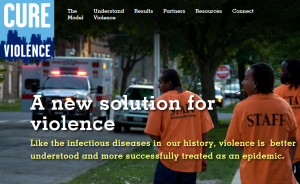 We first came across “Operation Ceasefire” and the practice of call-ins with Julie Reynolds Martinez, who explained how federal agents (e.g. FBI, ATF, DEA, etc.) show gang members who have been identified with large amounts of violence the evidence they could use to arrest them and their fellow members but provide them an opportunity to change. The local law enforcement, along with community members, will then speak of how they would prefer these gang members to be better citizens than in prison, and show them that they could be welcomed. This combination of threat of punishment and an avenue for communal acceptance has shown success in some cities but ended after only 1 call-in in Salinas. I was able to ask the Chief of Police in Salinas about it, who explained that not all of the agencies were willing to work together in this process and keep it going—ideally, they keep up with these gang members to track progress, and since it didn’t happen, she is hesitant to start it again until all the necessary parts are in place. She added that she plans on addressing this to be able to implement the program in the future. Perhaps there is a chance that both this approach and the CURE Violence approach could benefit the city, if there is effective collaboration and a clear consensus on goals and how to achieve them.