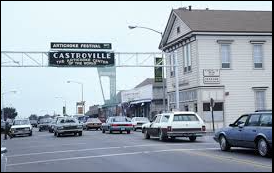 I have a lot of interest in the idea of Peacebuilding because of the fact that it is such a new concept to me. I had never thought about Peacebuilding until I came to the Middlebury Institute but there are instances in my life where I recognize that Peacebuilding would have had an effect on the lives of people around me.

I never thought there was anything strange about the way I grew up in a small town like Castroville, CA. I thought that being told not to go out at night, having drug dealers live two houses down from the house I grew up in, being taught what to do if a gang member asked me, “where I was from,” and hearing gunshots at night were all normal. There seemed to be nothing different or off about this to me because all of my friends went through this too. It wasn’t till I went to a different state for undergrad that I was told that that was not normal. It dawned on me how lucky I was because I was able to leave that, each night growing up, to go to my “safe” neighborhood.

While working in a jail, right out of undergrad, I remember having a conversation with an inmate about his life growing up. This man had been in and out of jail for violence and drug use. During our conversation, he told me about how he was used to drugs being in his life, growing up, because his mother and all of his friends used meth. He had told me about how he didn’t know what else to do but to use meth to fit in.

Both of these incidents showed me the disadvantages some people have to live with and what could push them to go down certain paths, even violent ones. This is why the idea of Peacebuilding is so interesting to me. I have personally met and known groups of people that could benefit from it.

I hope to learn more about the theories of Peacebuilding and learn how to put them into practice. I want a very hands-on approach to Peacebuilding so that we will be able to implement these techniques as thoroughly as possible.