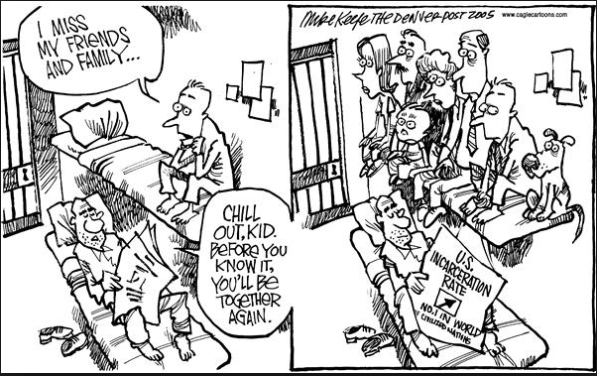 Is Restorative Justice the answer to the criminal justice system in the U.S. or is it just a new jacket to wrap around the same problem?

Yesterday was an interesting day in class, we were fortunate enough to have Professor Julie Shackford-Bradley agree to come and teach our class about restorative justice and start a worthwhile, in my opinion, discussion over the practices and theory. Having studied criminology and criminal justice in undergrad, restorative justice is not a foreign concept to me. In a majority of my undergrad classes, we discussed the idea of restorative justice and how the idea was gaining more traction in the country to replace the retributive system that we have now. I don’t think there was one professor that thought restorative justice was a bad idea. The idea that we would move away from a system that just punished people to a system that focused on rehabilitation and reconciliation between victim and offender sounded like heaven. Constantly learning and hearing about the insane incarceration rates within the criminal justice system here made me hungry to believe in any other type of system that would combat that. And then this need to believe in changing the system was increased when I started working in a jail. Constantly seeing the same people coming back every few weeks, for the same issues, was hard because I had begun to build relationships with these people and to see the system do nothing to help them was saddening. Not to say that they did not deserve some sort of repercussions for their actions. They still made the choice to harm other people and society but throwing in jail everytime wasn’t fixing the problem. The criminal justice system had really become a “revolving door” and in my eyes there need to be some sort of change.

This is why I was excited when I read that Julie would be coming in and teaching us more about the restorative justice idea and it’s practices. In my mind, I assumed that other people in class would jump on board because of the fact that restorative justice focused on the idea of reconciliation and the healing of a community. But I think I had assumed wrong; it seemed like many were not ready to jump on the restorative justice train as quickly as I had been. And once they asked their questions I started to understand why. While the idea of restorative justice is a nice sentiment, it won’t solve our issue of disproportionate incarceration rates that we face in this country. If we do not attack the systemic racism in this country, then the structural violence will continue.

This thought process made me start questioning the usefulness of restorative justice and how it still does not fix the overarching issue here but I still do believe that parts of restorative justice could still be useful. The focus on ideas of community building and rehabilitation are still very important in my eyes even though I do recognize that they would not work in all situations and with all crimes. I also see a problem with some offenders being genuine in their willingness to change or if they are just doing it to get out of punishment. I questioned Julie on this and even though she did say that it would be very difficult for an offender to successfully lie in front of everyone involved; in my experience I have met many offenders that are very convincing when they lie.

In the end, I am grateful for Professor Julie Shackford-Bradley for coming and telling us about the concept of restorative justice even though I am not completely sold on the idea anymore. I do believe though that parts of restorative justice could be useful in some capacity and that we should all still keep an open mind about this idea because the system we have no in the country, in my opinion, is not working.