High School Students from Japan, US, and Russia Discuss
a Path toward a World Free of Nuclear Weapons

For a summary of this report, please click here.

This year’s Critical Issues Forum (CIF), one of the flagship nonproliferation education projects at the James Martin Center for Nonproliferation Studies (CNS), marked a significant milestone. For the first time in the sixteen-year history of the project, it engaged Japanese high schools from Hiroshima and Nagasaki, the two cities devastated by atomic weapons in 1945. The CIF is a unique nonproliferation and disarmament education project for high school teachers and students around the world to promote awareness of the importance of these issues. The project also aims to develop critical thinking skills of high school students, and to develop appreciation among participants of different national and cultural perspectives on complex but vital international security issues.

The 2013 spring conference, the culmination of the semester-long project, was held on April 19th and 20th at Santa Catalina High School in Monterey, one of participating schools in the project. At the conference, students from eight US high schools in California, Connecticut, Hawaii, Massachusetts, and Wisconsin, one Russian high school from the closed nuclear city of Novouralsk, and three Japanese schools from Hiroshima and Nagasaki presented their findings on this year’s topic, “Toward a World without Nuclear Weapons: Progress, Prospects, and Challenges.”

This year’s topic exemplifies the current status of nuclear disarmament. Since President Obama made his historical Prague speech in April 2009 pledging US commitment to the security of a world without nuclear weapons, achievements toward nuclear disarmament have been modest. Furthermore, three years after state parties to the Treaty on the Non-Proliferation of Nuclear Weapons (NPT adopted a comprehensive Action Plan, progress on implementing its disarmament section remains very limited.

As the CIF conference was held just one week before the second session of the 2015 NPT Review Conference Preparatory Committee convened, CIF students were also closely following global nonproliferation and disarmament trends, using, among other resources, CIF staff and other civil society analysis of scrutinizing the progress towards a world without nuclear weapons.

Preparing for the Spring Conference

The CIF teacher’s workshop, held November 29-December 1, 2012, introduced teachers to this year’s curriculum, developed by the CIF project team in consultation with CNS experts, and provided instruction on how to conduct the CIF program with students. CNS experts delivered lectures on various aspects related to nuclear disarmament, progress, and challenges. After the workshop, each participating school’s students completed two “mini-projects,” under the guidance of CIF teachers, examining the complex status of nuclear nonproliferation and disarmament around the world.

The students’ work was divided into three steps. Step 1 helped students understand the concrete, fundamental facts underlying nuclear weapons and basic theoretical concepts. Step 2built on the knowledge gained in Step 1 by guiding students through the progress toward nuclear disarmament and remaining political and technical challenges. The final Step 3 project asked students to visualize their own solutions or scenarios for a world without nuclear weapons. At the spring conference, students presented their final project.

Each school delivered a final project as a group, ensuring that each presentation was very unique and creative, employing various approaches and methods under the common theme of Toward a World without Nuclear Weapons.

One of the veteran high schools, Franklin High School from Elk Grove, California, had two parts to its presentation: the first part was well-researched analysis on the current nonproliferation regime that divides the world into two categories: nuclear weapon states and non-nuclear weapon states. In addition to these two categories, the Franklin students used European countries that host US nuclear weapons under NATO nuclear sharing policy to analyze cold war thinking of political alliances that still dominates the world.

In the second part of the presentation, Franklin students presented photos and pictures of hibakusha (atomic bomb survivors) and the effects of atomic weapons in Hiroshima and Nagasaki. The school collaborated with Japanese CIF high schools to collect these pictures prior to the conference, enhancing US and Japanese high school students’ cross-cultural communication experience.

The presentation from La Puente High School in Southern California incorporated a role-play to portray the current NPT regime, its challenges, and prospects toward a nuclear-free world. The school assigned three students to play the role of the United States, North Korea, and South Africa. Each “representative” described “their” country’s nuclear and security policy and its historical background. The La Puente students’ skit was entertaining, informative, and accurately delineated each state’s nuclear status.

Students from Santa Catalina School in Monterey presented their views on how to achieve a world without nuclear weapons. Students posed a question regarding the necessary steps we should take to move toward a more peaceful society. Through this query, they incorporated the important question of nuclear deterrence and the lack of enforcement mechanisms in the NPT regime. Students reviewed the variety of proposals, such as the establishment of an international fuel bank and a strengthened role of the United Nations for effective implementation of nuclear disarmament. After their presentation, Santa Catalina students facilitated an interactive session to discuss solutions to North Korea’s nuclear crisis in a small group. While most of the students recognized the difficulty and obstacles facing North Korea’s nuclear issues, they expressed their hope to achieve de-nuclearization of the Korean Peninsula in a peaceful way.

Choate Rosemary Hall, in its fifth year in the CIF project, introduced their careful and cautious thoughts on prospects for a world free of nuclear weapons. For the spring conference, students made efforts to clearly understand the facts and current status of nuclear weapons, and introduced concrete proposals as to how the world can realistically make progress toward the goals of a nuclear weapon-free world. Furthermore, students detailed the definition of their vision of a nuclear weapon-free world, as well as how to maintain such a world after having accomplished it.

Each school’s presentation was followed by an active question and answer session. It was obvious that all the students comprehensively studied nuclear disarmament and nonproliferation issues during the semester. They expressed keen interest in the current challenges facing nuclear disarmament and nonproliferation. Many questions were related to how to solve the current nuclear crisis in North Korea. Students also challenged NPT nuclear weapon states to have more constructive debates over the indiscriminate nature of the current NPT regime.

Japanese students’ presentations were naturally based on their own cities’ firsthand experience of nuclear devastation. While each Japanese school comprehensively studied current global proliferation challenges, their message was clear: the importance of understanding the real effects of the use of nuclear weapons against human beings and their long-lasting effects on both humanity and the environment. The first-time participation of Japanese schools brought fresh perspectives to the CIF project.

Kwassui High School from Nagasaki used their presentation to connect with the personal experience of one of the students participating in the conference—that of her grandmother, a hibakusha—to emphasize the unknown, long-term dangers of radiation exposure. Kwassui students also introduced their school’s active peace initiatives, including their petitions for peace and nuclear abolition, which has been gathering signatures for over the thirteen years and is being recognized by the United Nations. The school also translated a Japanese book titled “Furisode no Shojo [Girls in Kimonos],” a story about two girls who died because of the atomic bomb, into English. This translation project is one of the activities conducted by the school’s Peace Studies Club. The purpose of this project is to show the inhumanity of nuclear weapons. At the end of the presentation, the students expressed their support for the idea of establishing a nuclear weapon-free zone in Northeast Asia, and their opinion that Japan should play a more active role in that effort.

Another high school from Hiroshima, Yasuda Girls High School, focused on the impact of civil society on nuclear disarmament progress. The students also stated that we should not compromise on nuclear abolition and global efforts must go beyond controlling and reducing nuclear weapons. The students also demonstrated the effective use of multimedia with both visual and sound effects to promote the importance of nuclear disarmament.

The sole participating school from Russia, Gymnasium #41 in Novouralsk, fascinated the audience by presenting two possible, but opposite, ways toward the future: one toward a world free of nuclear weapons, and the other to a possible nuclear war. These Russian students from one of the closed nuclear cities that were established during the Cold War to make nuclear weapons and their essential ingredients are also directly and uniquely connected with nuclear issues since people’s lives there center on nuclear industry.

Other Aspects of the Conference

The conference featured keynote speaker Mr. Jon Wolfsthal, CNS Deputy Director and former Special Advisor to Vice President Joseph Biden for Nuclear Security and Nonproliferation. His speech focused on US nuclear weapons and nonproliferation policy, based on his own experience supporting the Obama administration’s negotiation and ratification of the New Strategic Arms Reduction Treaty with the Russian Federation, and the development of nuclear policy through the 2010 Nuclear Posture Review and other security policy issues under the Obama administration. His speech raised enthusiastic questions from the students, many interested in how to reduce the role of nuclear weapons in US security policy, and the alternatives to nuclear deterrence to maintaining peace and security in the world.

The conference also welcomed Mr. Tetsuya Iwata, Consul at the Consulate General of Japan in San Francisco. Since this year was the first time that Japanese high schools participated in the CIF project, it was significant to have a Japanese official working for improving US-Japan relations present at the conference. Mr. Iwata presented Japan’s disarmament and nonproliferation policy to the audience.

In addition, this year’s conference invited two graduate students of Masters in Nonproliferation and Terrorism Studies at the Monterey Institute of International Studies to share their experience and encourage high school students to study vital international security issues.

Sayaka Shingu, originally from Hiroshima, shared her own passion for nuclear disarmament given her background. She is currently interning at the United Nations Office for Disarmament Affairs in New York. She also worked for the Ministry of Foreign Affairs of Japan for about one year, where she was granted a training period in the US to study nonproliferation issues. The other MIIS student, Jonathan Ray, who is focusing China’s nuclear issues, also shared the story how he came to be interested in international security issues. Many CIF students attending the conference were impressed by these two young professionals and raised many impassioned questions on current nuclear issues, including regional proliferation challenges.

All of the high school students participating in the CIF worked hard to master knowledge on this daunting topic over the past semester. They gave high quality presentations of their research and analysis and showed clear enthusiasm for the study of nonproliferation and disarmament issues.

Students were also able to become acquainted with fellow participants from around the United States, Japan, and Russia and build friendships that will contribute to better understanding across cultures.

It is encouraging that all the participating students’ presentations underlined the importance of education in order to accomplish a world free of nuclear weapons while recognizing the daunting challenges that need to be overcome. In this sense, students also have become more aware of the important responsibility that each CIF participant, the future leaders in nonproliferation and disarmament, need to bear.

This year’s CIF program is funded in part by the United States-Japan Foundation, supporting students from both countries who are studying the issues surrounding nuclear disarmament. The CIF program also receives support from the Chapman Foundation for students in Monterey. 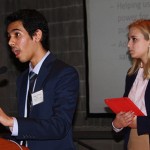 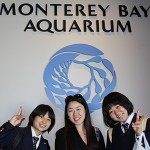 CIF participants enjoy the Monterey Bay Aquarium after the conference 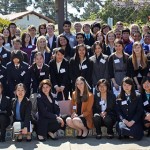 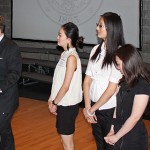 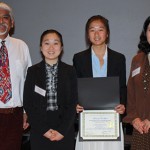 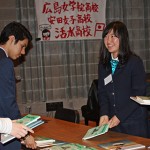 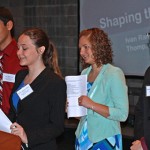 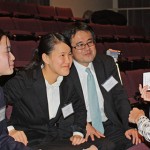 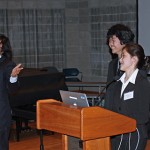 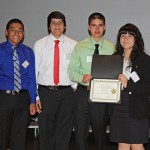 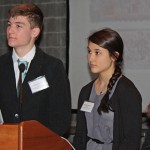 Presque Isle HS students answer questions after their presentation on, The Path to Nuclear Disarmament 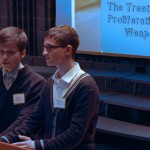 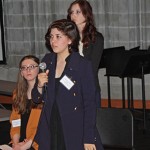 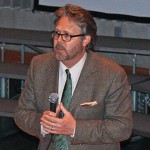 Students listening to their peers attentively 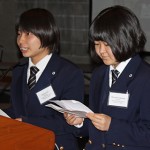