Although, many believe that high school students are too young to be engaged in issues related to nuclear safety, security, nonproliferation and disarmament, this type of conventional wisdom can often be a hindrance to engaging stakeholder in the most innovative and fresh ideas for tackling the world’s pressing challenges. As was evident at the 2012 Critical Issues Forum (CIF) conference, the world’s future leaders are ready to get involved in important discussions related to global peace and security.

The spring 2012 CIF conference was held in Vienna, Austria, as a side event of the first session of the Preparatory Committee for the 2015 Review Conference of the Parties to the Treaty on the Nonproliferation of Nuclear Weapons (NPT PrepCom). This year’s conference was held on April 30 at the Vienna International Center (where the PrepCom occurred), and on May 1-2 at the Diplomatic Academy of Vienna. IAEA Director General Yukiya Amano gave the keynote address, highlighting his enthusiasm in disarmament and nonproliferation education.

The CIF program is funded by the U.S. Department of Energy to promote nonproliferation education of high school students and teachers. This year’s conference was co-sponsored by the James Martin Center for Nonproliferation Studies (CNS), the Austrian Federal Ministry for European and International Affairs, the Vienna Center for Disarmament and Nonproliferation (VCDNP), and the Japanese Ministry of Foreign Affairs.

Disarmament and Nonproliferation Education and the NPT Review Process

Disarmament and nonproliferation education at all levels, including secondary education, was the subject of the Secretary General’s report on the UN Study on Disarmament and Nonproliferation Education, and also is highlighted in the Action Plan of the 2010 NPT Review Conference Final Document. The co-sponsors of the CIF conference hoped that by providing high school students with an opportunity to observe part of the 2012 NPT PrepCom and facilitating their interaction with senior diplomats and officials from international organizations, the CIF event would serve as a concrete example of how education can promote nuclear nonproliferation and disarmament.

Since the Austrian government and CNS opened the VCDNP in February 2011, the VCDNP has been conducting numerous nonproliferation and disarmament education activities in cooperation with the Austrian MFA. In conjunction with this development, CNS and the Austrian MFA together with the VCDNP decided to conduct this year’s CIF spring conference as a side event of the NPT PrepCom.

Overview of the 2012 Program

The annual cycle of the CIF program started with the teachers training workshop held in December in Monterey. Based on the education curriculum developed by CNS on this year’s topic, “Nuclear Safety and Security,” students with guidance from their teachers, worked diligently on their projects and submitted two papers in preparation for the conference.

Students selected from five US high schools and five from Russia’s closed nuclear cities as well as one school from Bosnia and Herzegovina participated in the final conference in Vienna. In addition 10 students from the Austrian Red Cross High School and several students from the Diplomatic Academy of Vienna joined the conference as observers.

The students worked very hard to investigate formidable challenges related to the issues of nuclear safety and security, which have major impact on global peace and security. These issues are not new, but the Fukushima Daiichi Nuclear Power Plant accident reawakened the world to the fact that while the probability of nuclear accidents or attacks may be low, should they occur, the potential consequences are enormous.

During the session held at the Vienna International Center (VIC) on April 30 as a side event of the NPT PrepCom, IAEA Director General Mr. Yukiya Amano gave a keynote address. Mr. Amano began his talk by mentioning why he became interested in nonproliferation and disarmament issues. He encouraged the young people in the audience to pursue their goals and dreams, and find something they can be passionate about. He also engaged students during the question and answer portion of his talk. High school students enthusiastically asked many substantive questions ranging from current proliferation challenges, such as the nuclear issues in North Korea and Iran, to youth involvement in the NPT Review Process.
High school students from Franklin High School in California, and Gymasia 164 in Zelenogorsk, Russia presented in front of delegations to the NPT PrepCom. These two schools worked together remotely, communicating via email and Skype to create a combined presentation. Their presentation focused on the attitudes of developed and developing nations towards nuclear safety and security. Using several country case studies, the students’ presentation was very insightful and convincing. Many participants who observed the presentation were very impressed by their high quality presentation.

The students’ presentation was followed by a testimonial of a Special Communicator for a World Without Nuclear Weapons designated by the Japanese Ministry of Foreign Affairs. Mr. Masahito Hirose, an atomic bombing survivor from Nagasaki shared his experience with the students and participants during this event. For most of CIF students it was their first time to listen to such a story directly. Inspired by his experience and continuing and ever growing passion for nuclear disarmament, many of these high school students expressed their determination to contribute to making progress toward a nuclear weapons free world.
Representing co-hosts, Japanese Ambassador Toshiro Ozawa, Permanent Representative to the International Organizations in Vienna, and Mr. Ronald Sturm from Austrian Federal Ministry for European and International Affairs congratulated students for their great work.

Sessions at the Diplomatic Academy

Student presentations were creative and innovative based on their thorough studies. Gymnasium #41 from Novouralsk, Russia’s presentation linked nuclear safety and security issues to the philosophical teachings of Emmanuel Kant. The students investigated past nuclear power plants accidents and threats of nuclear terrorism in an effort to answer overall philosophical questions posted by Kant.

Choate Rosemary Hall from Connecticut discussed nuclear safety and security issues using the Indian Point Nuclear Reactor facility in Buchanan, New York due to its proximity to their school. Their presentation included the history of this reactor including site selection and design, the company, accidents that have occurred at the plant, the plant’s upcoming recertification in 2013, the security of the plant, and the economic and political factors that have formed and will continue to form the basis for all discussions about this plant. They focused on possible changes in plant design and ways to address the safe storage of nuclear waste.

Santa Catalina School from Monterey participated in the CIF program for the first time. They discussed the intricate psychological sociological, economic and political effect of a cyber-attack on a nuclear facility through outlining past cyber-attacks.

School of Cosmonautics, Zheleznogorsk, Russia presented nuclear safety in Ukraine based on lessons learned from the Chernobyl accident. They discussedinternational efforts to enhance nuclear safety and focused on particular measures implemented in Ukraine in compliance with obligations under the Convention on Nuclear Safety, the Convention on Early Notification of a Nuclear Accident, the Convention on Assistance in the Case of Nuclear Accident and the Joint Convention on the Safety of Spent Fuel Management and on the Safety of Radioactive Waste. Their presentation also covered the lessons Ukraine learned after the most serious accident in the history of the nuclear industry as well as after the Fukushima tragedy. Their presentation included an educational animated short video clip for pre-college school students to learn more about the impact of natural hazards on Ukrainian nuclear power plants.

This year’s CIF welcomed a new school from Bosnia and Herzegovina, United World College in Mostar. They presented their studies on challenges related to Pakistan’s nuclear weapons and proliferation issues. In addition, the students introduced their schools’ unique plan to integrate nonproliferation issues in its cross disciplinary activities. Each school’s presentation was followed by a question and answer session where students actively engaged.

Ms. Olga Martin, Program Manager, Global Initiatives for Proliferation Prevention Program Nuclear Nonproliferation Division at Los Alamos National Laboratory, representing the US Department of Energy, the major funder of the program, congratulated students on their excellent work, and discussed the importance of science in international security, while encouraging students to continue to study this important issue.
Representing the Japanese Ministry of Foreign Affairs, Mr. Michiru Nishida, who studied nonproliferation issues at the Monterey Institute, expressed his view on the importance of nonproliferation and disarmament education while introducing the Japanese government’s initiative in this sphere.

At the closing ceremony, Mr. Ronald Sturm from the Austrian MFA congratulated each participant for his or her hard work and the extraordinary great outcome of the conference.

CIF students and teachers also had an opportunity to participate in a tour of the Comprehensive Test Ban Treaty Organization (CTBTO), including a presentation on the verification regime, visits to the radionuclide rooftop station and the International Data Center. On the final day of their stay, the students and teachers enjoyed cultural activities in Vienna visiting Schönbrunn Palace and enjoyed a guided tour at the Kunsthistorisches Museum (museum of fine arts).

This year’s NPT PrepCom testified that more and more state parties and civil society are becoming aware of the importance of disarmament and nonproliferation education to make progress toward a world free of nuclear weapons. Austrian Ambassador Alexander Kmentt, the Director for Disarmament, Arms Control and Non-Proliferation in his statement (http://www.reachingcriticalwill.org/images/documents/Disarmament-fora/npt/prepcom12/statements/3May_Austria.pdf) highlighted the CIF spring conference as one example of Austria’s commitments to promote disarmament and nonproliferation education. Moreover, Austria and Japan co-submitted a working paper (http://www.reachingcriticalwill.org/images/documents/Disarmament-fora/npt/prepcom12/documents/WP11.pdf ) on disarmament and nonproliferation education again highlighted their co-sponsorship of the CIF Conference along with each country’s efforts to promote such education.

The CIF conference proved that in order to promote disarmament and nonproliferation education, it is essential for state parties and educational and research institutes to closely cooperate on this endeavor. CNS continues to make efforts to reach out to more schools in different countries, including in the Middle East and Asia, to promote disarmament and nonproliferation education.

Elucidating the importance that a program such as CIF has for the world’s future leaders, the concluding remarks of the students at the session held at the Vienna International Center in front of delegations to the NPT PrepCom noted:

We the students of the world, understand that we will one day be given the responsibility of leading and preserving our world, so we’ve found educating ourselves and participating in the disarmament and nonproliferation movements to be so incredibly important. 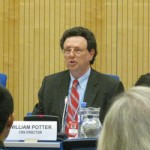 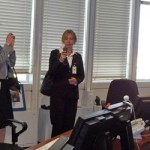 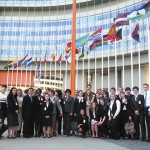 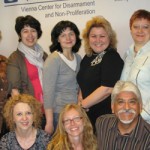 CIF Teachers at the VCDNP 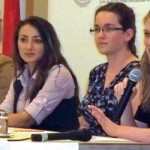 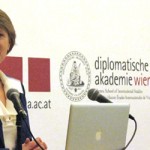 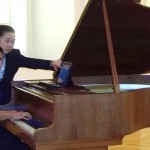 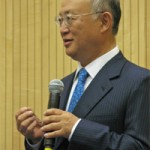 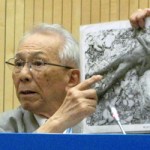 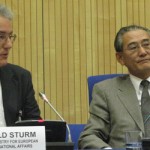 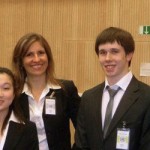 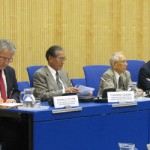 Opening of the CIF Conference 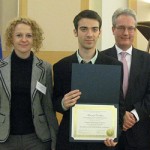 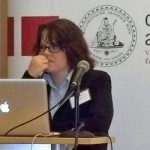 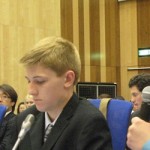 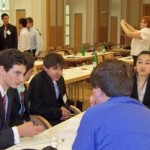 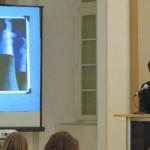 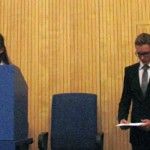 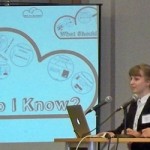 Students from Novouralsk, Russia discuss nuclear power plant accidents and threats of nuclear terrorism at the Diplomatic Academy of Vienna 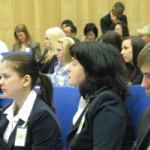