A World Free of Nuclear Weapons For the Next Generation:
U.S., Russian High School Students Present Research On Nuclear Disarmament

This year’s Critical Issues Forum (CIF) spring conference, which was held April 23-24, 2009 in Monterey, witnessed remarkably successful results. Many participants and CIF project members agreed that the content of student presentations continues to improve every year. The conference also marked the largest number of participants in the history of the Critical Issues Forum Program. More than 50 students and over 20 teachers from 10 U.S. high schools and 10 schools in Russia’s closed nuclear cities participated in the conference. In addition, a dozen of guests and observers attended the event. The participating high schools presented their research on “Nuclear Disarmament: Challenges, Opportunities, and Next Steps” they conducted throughout the semester. The conference and interviews with participants were featured in the April 24th Monterey County Herald article.

At the spring conference, students demonstrated a keen interest in the topic and were very creative in presenting the results of their research. Presentations included student-produced movies, a Nuclear Nonproliferation Treaty (NPT) Review Conference simulation, skits revolving around nuclear weapons history, current events in nuclear development, and other interactive activities.

With a still-lingering excitement of the President Obama’s speech on April 5th in Prague calling for a world without nuclear weapons, many of students’ presentations at the conference featured recent developments in nuclear disarmament and nonproliferation issues. In particular, students from both Russia and the United States presented analysis and prospects of the next steps for U.S.-Russia nuclear weapons reductions.

Students’ presentations took various approaches to discuss nuclear disarmament issues. One of Russian high schools, Linguistic Gymnasia #164 from Zelenogorsk, directed by a CIF veteran teacher, Nelli Porseva, presented short movie featuring past NPT review conferences. With some humor, the movie highlighted shortcomings and challenges of the NPT review process, winning tremendous applause and inviting cheerful laughter from the audience. At the same time, it demonstrated the in-depth analysis and research carried out by the students. In addition to looking back at the past review conferences, the Zelenogorsk students also presented a prognosis for the upcoming 2010 NPT Review Conference.

The experience of preparation for the presentation and the conference itself were, as the Zelenogorsk students commented, very valuable and significantly enhanced their understanding on the issues of nuclear disarmament. Delivering presentations in English, which is not their mother tongue, at this international conference was challenging, but the students shared their excitement of the sense of achievement.

Gymnasia #41 from Novouralsk captivated the audience with its insightful, well researched, and effective presentation. It contained numerous aphorisms from historical figures analyzing significant events surrounding nuclear weapons development. The presentation thoroughly covered nuclear weapons-related events since the dawn of the nuclear age to the most recent development including regional conflicts in Northeast Asia, the Middle East, and South Asia. The presentation also brought their classmates’ message and discussions which were filmed back in Novouralsk to the conference.

Evgenia Lapshina, a student from Lyceum in Lesnoy, concluded her presentation on “the Role of Personality in the Nuclear Age” with her own powerful thoughts, stating that the CIF project has changed her vision of the world and to the dangers of the nuclear age:

“We must fight ignorance with education, apathy with direction, and despair with hope. We owe this to ourselves and to our future children. This is our challenge. It is the challenge of our time and of our generation. All we need to do is to take a first step. Without doubt, a first step will lead to a second, and we will be on our way. My first step has been participation in this conference.”

Many schools highlighted the effects of the use of nuclear weapons in Hiroshima and Nagasaki, and its impact on the nuclear disarmament movement in many different countries. Short video clip of a testimony by Ms. Shigeko Sasamori, Hibakusha (atomic bomb survivor) and peace activist was included in the program of the conference. Ms. Sasamori was originally scheduled to attend the conference as a guest speaker. Unfortunately, due to a health problem, she could not travel to Monterey. Nevertheless, her message to young people for a world free of nuclear weapons imbued students’ hearts at the conference with hope and passion for nuclear disarmament.

The students from Redwood Christian High School from San Lorenzo, CA, in an attempt to further understand the cultural implication of nuclear policies, used Samuel Huntington’s The Clash of Civilizations to examine the intrinsic differences between cultures. In their well analyzed presentation, these students focused on the difference in the perspectives of different cultures, and how these different perspectives can affect countries’ nuclear policy and the nonproliferation regime.

One of the first-time participants, Janesville Academy of International Studies in Wisconsin, incorporated several formats into their presentation, including an original video clip, an NPT Review Conference simulation, and students’ artwork on nuclear disarmament. Another first-time participating school, University of Hawaii Laboratory High School, focused on the nuclear testing that took place on the Marshall Islands, and its long-lasting affect to both environment and living beings. Even today, many islanders continue to seek medical help in Hawaii and thousands have migrated to the United States seeking a life far away from the destruction caused by nuclear testing. Several schools’ presentations included interactive activities, such as a nuclear disarmament quiz, arms control treaty negotiation simulation, and a contest to design the best T-shirt on nuclear nonproliferation topics.

The conference also featured a distinguished keynote speaker—Dr. Patricia Lewis, Deputy Director and Scientist-in-Residence at the CNS, and former director of the United Nations Institute for Disarmament Research (UNIDIR). In her speech “Passing the Nuclear Baton: Nuclear Disarmament and the Next Generation” Dr. Lewis challenged the students to become responsible and engaged citizens and expressed hope that their generation could pave the path toward a world free of nuclear weapons.

This year marks the 20th anniversary of CNS. Over the past two decades, CNS has dedicated itself to training the next generation of nonproliferation specialists and raising global public awareness. The CIF program, which is in its twelfth year, has been an integral part of CNS’s educational effort and served as an important outreach program.

This year’s CIF topic could not be more appropriate given the increasing momentum and renewed efforts by civil society, as well as many national and international leaders to create a nuclear free world. A world free of nuclear weapons proposed by many eminent leaders, including President Obama, can only be realized if the growing disarmament movement is inherited and implemented by the next generation of leaders. One of the students eloquently expressed the significant mission of students who participated in the conference: “Now we are just teenagers but a few years will pass and some of us will become scientists, or inventors, or politicians…who knows, maybe there is a future president among us! Each of us can be as powerful as anyone who ever lived. It is up to us to change the world.”

Funding for this year’s Critical Issues Forum is provided by U.S. Department of Energy
and the Ford Foundation. 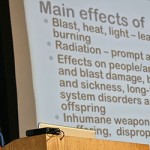 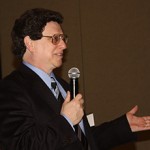 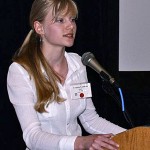 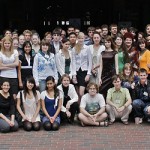 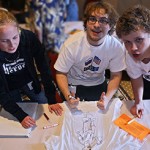 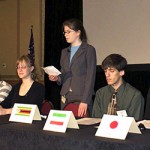 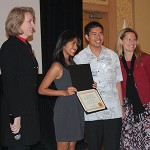 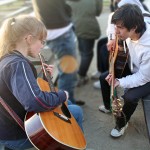 U.S. and Russian students exchange their music at the picnic 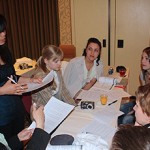 Twenty teachers from U.S. and Russian high schools launched the 2008-2009 Critical Issues Forum (CIF) with the Teacher Development Workshop, which took place from December 4 to 6, 2008 at the James Martin Center for Nonproliferation Studies (CNS) in Monterey. The topic of this year’s CIF program is “Nuclear Disarmament: Challenges, Opportunities and Next Steps.” This topic is remarkably timely given the increasing momentum in nuclear disarmament debates in the United States and several other countries. CNS staff and experienced high school teachers collaborated to develop the curriculum and teaching materials for this year’s CIF topic, and introduced them at the workshop. Experts from CNS, the Graduate School of International Policy Studies of the Monterey Institute, and the Lawrence Livermore National Laboratory (LLNL) gave lectures sharing their expertise.

The workshop consisted of three components: content-lectures by CNS experts and a guest speaker; instruction on how to conduct the CIF program with students; and a teacher-led discussion on how to further improve the program. The lectures included an overview of the current nuclear weapons status in the world, the basics of nuclear weapons technology, U.S. – Russia bilateral arms control and disarmament efforts, multilateral arms control and nuclear disarmament, and roles of civil society in nuclear disarmament. A panel discussion with three speakers, each representing a different stance on nuclear weapons policy, also stimulated participants to examine the intricacies of the nuclear weapons issue.

The topic for this year’s CIF program could not be more appropriate. The initiative taken by four preeminent former high-ranking U.S. officials—George Shultz, William Perry, Henry Kissinger and Sam Nunn—revitalized the momentum for nuclear disarmament, placing the issue on the mainstream policy agenda. Other countries, leaders, and civil society started voicing support for disarmament efforts, and this movement is significantly growing worldwide.

The CIF program’s goal is consistent with the CNS mission to train the next generation of nonproliferation specialists and raise global public awareness on weapons of mass destruction (WMD) issues. High school students rarely have an opportunity to study nonproliferation and disarmament of WMD. The CIF program provides high school students with a precious opportunity to study international security and WMD issues, aiming to make an impact in securing a more peaceful world in the future.

A world free of nuclear weapons proposed by these four statesmen can only be realized if the growing disarmament movement is inherited and implemented by the next generation of leaders. In that sense, disarmament and nonproliferation education for young people, including high school students, is one of the most important measures to enhance peace and security in the world.

The participating teachers in the workshop will take what they have learned from the content lectures and each other to work with their students during the next semester on the topic of nuclear disarmament. The teachers and students will return to Monterey in April 2009 to present their findings at the cross-cultural student-teacher conference, the highlight of the year-long program.

CNS thanks the following for their support of the CIF Teacher Development Workshop: the U.S. Department of Energy and the Ford Foundation. 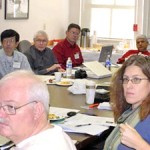 Teachers listening to a presentation. 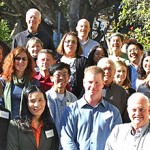 Participants in the 2008 CIF Teachers Workshop 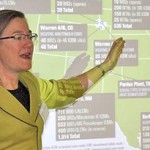 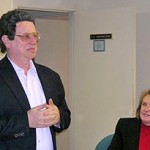 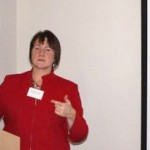