By Alexandre Dumouza in Uncategorized on April 11, 2020. 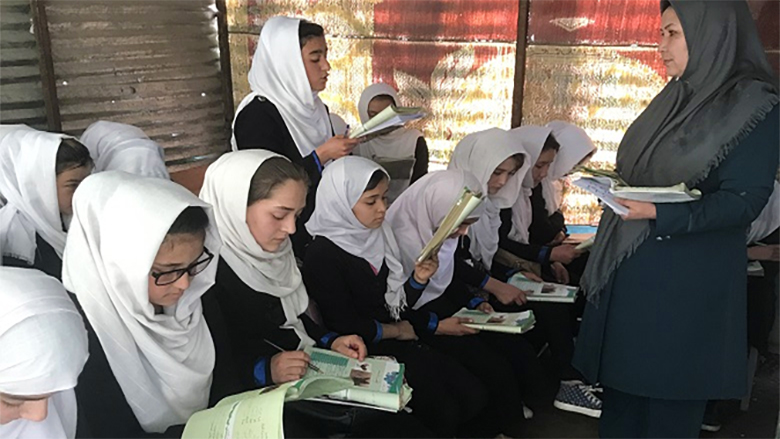 Over the last four decades, Afghanistan has suffered from continuous wars that have devastated the lives of many civilians. During the 1980s, over a million Afghans lost their lives, and forced millions more to flee to neighboring countries and seek refuge. When Soviet forces withdrew their troops in 1989, conflict ensued with civil strife between the Taliban, an Islamic political and military movement, and the government. Much of the fighting was exacerbated by ethnic conflict which left many Afghans internally displaced, resulting in loss of education and employment (Independent High Commission on Education for Afghanistan, 2003, p. 29). Moreover, when the Taliban toppled the government in 1996, girls and women were denied access to healthcare, employment and education (UNICEF, 2003, p. 6). Following the fall of the Taliban five years later, much of Afghanistan’s infrastructure had been destroyed. In response, the government decided to rebuild the country’s education system from the ground up.

According to a 2003 report, much of the government’s approach during the twentieth century was conventional in the sense that only a limited portion of government actors were involved in policy making. Furthermore, segments of society were not always represented when it came to decision making (Independent High Commission on Education for Afghanistan, 2003, p. 30). However, at the turn of the century, Afghanistan had shifted from a traditional hierarchical power structure to become more inclusive.

Today, despite the catastrophic circumstances and reoccurring violence, Afghan society recognize the value in education as a “bridge that transforms an emergency situation into one of hope and promise” (UNICEF, 2003, p. 2). Education has unified the country, with the government of Afghanistan utilizing quality education as the foundation for poverty reduction and economic growth (Independent High Commission on Education for Afghanistan, 2003, p. 1). The idea of a good quality education includes “cultural diversity, multilingualism in education, peace and non-violence, health education and sustainable development (Independent High Commission on Education for Afghanistan, 2003, p. 108).”

There has been a vast improvement in Afghanistan’s educational system over the years. One example is the Strengthening Education in Afghanistan (SEA) program, a USAID initiative, which provided teacher training to over 4,500 teachers in 2018 (Fippin, 2019). However, many citizens are still not receiving a quality education, and only half of the population between the ages of 15 and 24 are literate (Fippin, 2019). Furthermore, in addition to lacking quality resources, teachers and trainers are not well-equipped to handle the large class sizes endemic to Afghan classrooms.

Another issue that affects students seeking a quality education is the disproportionate ratio between teachers and students. As depicted in the graph to the left, in 2018 the average ratio was 44 students to one teacher (“GEM Report Education Progress,” 2020). The spike in the graph, where the student-teacher ratio was nearly 60:1 reflects the attitude towards education during the Taliban’s five-year rule. Frequently, teachers were threatened or attacked and schools were bombed, treating these institutions as military targets rather than a place of learning (Barr, 2017). To this day, Afghanistan still suffers from a deficit of teachers, presenting immense challenges to delivering quality education.

Afghan children still face an abundance of barriers in accessing decent education in both urban and rural areas. Safety hazards which stem from poor infrastructure is a major concern that can inhibit student learning (GEM Report Education Progress, 2020). According to the World Bank, “around 70% of public schools lack clean drinking water and working electricity” (Molina et al. 2018, 7). Additionally, there is a lack of available sanitation for students to use. UNESCO observes that only 31% of primary schools have access to single-sex bathrooms.

It’s not all grim though. While the disruption of war has impacted millions of young Afghans, a collaborative approach has been put forth to increase access to education. Since 2002, the Ministry of Education has taken initiative and embarked on a national ‘Back to School’ campaign. With the help of international donors, they launched a campaign which opened up its doors to get more than 3 million children—1/3 of them girls—enrolled in school again.

As of April 2017, a Ministry of Education official told Human Rights Watch that there are 9.3 million children in school, 39 percent of whom are girls. However, it is important to note that claims from the Afghan government regarding the number of students who have received an education post-2001 invasion is frequently disputed (Barr, 2017). The reasons for doubt are fair —the Afghan government is described as having “centralized, though typically weak, state control and often low-capacity, locally governed institutions” (Molina, Trako, Hosseini Matin, Masood, & Viollaz, 2018, p. 9). There seems to be a disconnect between student learning objectives, and which offer the opportunity for teachers to advance in their career despite lacking certain qualifications and seniority. Though there has been significant progress over the past 16 years, more attention needs to be centered towards the performance and quality to maximize potential student learning outcomes.

← Quality in the classroom: A peek into Peru’s approach A Snapshot of Nepal’s Female Literacy Rate →