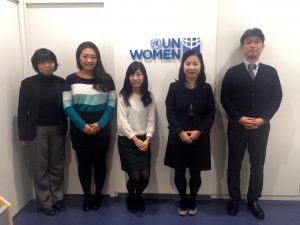 In Winter 2015, I went back to UN Women Japan Liaison Office, where I spent 3 months in the past summer, to help some work again as an intern. As I made a significant contribution last time I was there, they recognized me really well.

This time, I took a role of mentor and assisted 3 other interns who were newly hired. One of them was in charge of creating the Japanese website, which I was working on in the past summer, so I helped her with some translation. The Japanese website is based on the English website, which is maintained by the Headquarters. In addition to basic contents such as the organization profile and list of activities, we needed to put some new information in order to make it look relevant to Japanese readers. Therefore, the amount of contents to translate was enormous. We decided to split work and I mainly translated articles about the Sustainable Development Goals (SDGs), which was adopted at the 2015 UN Summit. Finally, in January we were successfully able to launch the Japanese website.

Another project I had was to start planning an event for International Women’s Day on March 8, 2016. Because of my previous experience of getting involved in planning and managing the opening ceremony of the office in the past summer, they asked me for some advice. It was a great opportunity to share my experiences with other interns. I participated in several meetings and discussed program contents. I also helped them identify possible vendors to work with for the event.

I also had a chance to give some advice on how to reach out to Japanese companies. UN Women Japan Liaison Office is relatively new, therefore it is important for the office to make as many contacts as possible to disseminate the idea of gender equality. Some of the fellow interns were not familiar with how to make the first contact to companies, so I showed them some examples. I hope UN Women will have a solid presence in the Japanese society soon and have many chances to work with other entities to raise awareness of women’s empowerment.

Overall, it was a great opportunity for me to work at UN Women for the second time. I was able to see how some of the work I took part in the past summer were carried on by other interns. It was also nice to use translation skills which I have been polishing here at MIIS.

Back to Japan Page