I attended the two-week nuclear research reactor course at the Czech Technical University in Prague. The course was primarily based in a research reactor in Prague and consisted of a series of lectures, site visits, hands-on activities, and scientific experiments. The course was meant to buffer the scientific and technical curriculum in the Nonproliferation and Terrorism Studies program and absolutely served that purpose. The course was a unique opportunity to see and do the things we have only learned about it books; it was a true practitioner course. Our lectures focused on research and power reactor construction and operation, the front and back end of the nuclear fuel cycle, the safe and secure operation of nuclear reactors, nuclear safety, and security, delayed neutrons, radiation waste disposal, etc. Site visits included touring three research reactors, one power reactor, a production facility for nuclear power plant machinery, and the National Radiation Protection Institute. Hands-on activities included operating a research reactor, scramming a research reactor, cleaning a mock radioactive spill, and safely handling uranium ore. Scientific experiments included neutron detection, gamma radiation detection, and neutron activation analysis. A knowledge gap exists between scientists and policy professionals, and I feel grateful to have had this experience early on in my career. I am certain that this course will benefit me in my future internship application to the International Atomic Energy Agency as well as my future application to the National Nuclear Security Administration Graduate Fellowship Program in which fellows work on nuclear security issues related to nonproliferation, stockpile stewardship, infrastructure, and oversight. 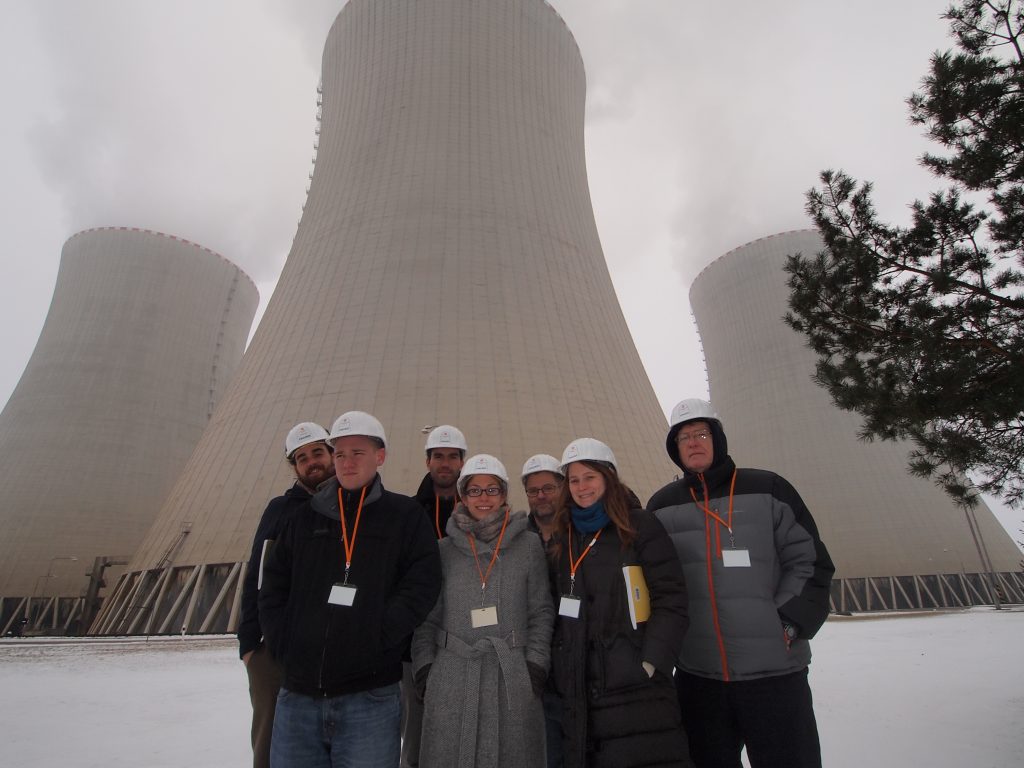 Our group in front of cooling towers at the Temelin nuclear power plant in the Czech Republic.

“We were told not to show you any mathematical equations.” This was part of our introduction to a nuclear research reactor course geared toward nuclear policy students. Nine Master’s students in the Nonproliferation and Terrorism Studies program at the Middlebury Institute of International Studies at Monterey attended a two-week course at Czech Technical University (CTU). This was the first time CTU taught students that weren’t majoring in nuclear science, and they weren’t taking any chances giving us policy students “mathematical equations,” which was treated as the equivalent of contraband.

The nuclear research reactor course consisted of a series of lectures, site visits, hands-on activities, and scientific experiments. As students focused on the policy aspects of nuclear nonproliferation, the course was meant to help fill a scientific and technical gap in our learning. Although we completed mandatory intercultural training prior to our course in the Czech Republic, the primary and most pronounced difference between the American students and the Czech professors was not citizenship, language, or culture, at least not in the traditional sense. The dividing line between us was that we focused on nuclear policy and they focused on nuclear science. In fact, our American professor that accompanied us during the course is a nuclear physicist and shared more similarities with the Czech scientists than with our American group.

As nuclear policy students, this course was invaluable to us. Although we have studied how nuclear reactors operate, the nuclear fuel cycle, nuclear safety, and security, etc., we had only previously studied these items in the abstract. The closest we had ever been to a nuclear reactor was viewing schematics in our textbooks. We may have been book smart and could describe how the nuclear fuel cycle worked, but we had never held uranium ore (with personal protection equipment, of course), seen cooling towers, or moderated a reactor.

A comparison could be a native Arabic-speaker versus someone who learned Arabic in the United States in a classroom taught by a non-native speaker. Can the individual really say she speaks Arabic if she has never traveled to an Arab-speaking country, does not connect the language to the culture, understand local idioms, or heard correct pronunciation? It is similar for nuclear policy wonks that do not understand the science behind their field. Can we really be experts on nuclear policy if we have never measured gamma radiation, conducted neutron activation analysis, or scrammed a reactor? She might think of herself as being fluent in Arabic, but a native Arabic-speaker may disagree. In the same way, we nuclear policy professionals may think of ourselves as nuclear policy experts, but nuclear scientists may very well disagree. We may be very knowledgeable, but our knowledge is incomplete without the foundation of nuclear science or real-world experiences. Although the course was transformative, to be clear, it was only two weeks and just began to scratch the surface of nuclear science. Stressing how much we had to learn, our Czech professor showed us a thick book titled “Uranium Mining,” the first step in the nuclear fuel cycle, and said, “for every slide you see, my students read a 300-page book and spend one semester.”

Back to Czech Republic Page