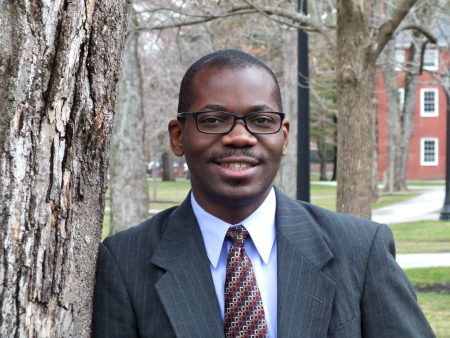 Damascus Kafumbe is an ethnomusicologist, teacher, performer, composer, and instrument technician/consultant. A native of Uganda, Kafumbe received his B.M. from Makerere University and M.M. and Ph.D. (Musicology) from Florida State University. He joined the Middlebury music faculty in 2011 to teach ethnomusicology/world music courses, direct the Middlebury African Music and Dance Ensemble, and maintain the College’s Ugandan musical instrument collection.

Kafumbe’s research spans diverse fields, including ethnomusicology, performance, history, politics, ritual, African studies, and social organization. He is working on a book project titled Tuning the Kingdom: Kawuugulu Music, Politics, and Storytelling in Buganda, which the University of Rochester Press will publish in the Eastman/Rochester Series in Ethnomusicology later this year. The book focuses on the Kawuugulu Clan-Royal Performance Ensemble of the Kingdom of Buganda, examining how origin stories define Baganda’s complex sociopolitical hierarchy and serve as a framework for music and dance performances that reinforce this hierarchy. The project also contextualizes the Kawuugulu Ensemble case study in the scene of similar historical and political ensembles in Uganda and Africa. Kafumbe has also published articles, reviews, and interviews in African Music, Ethnomusicology, World of Music, and Yearbook for Traditional Music.

A multi-instrumentalist, dancer, composer, and instrument technician, Kafumbe specializes in East African musical and dance traditions. He is knowledgeable about the construction and maintenance of many of the instruments he plays, and has served as an instrument technician and acquisitions consultant for the Musical Instrument Museum, Tallahassee Community College, Appalachian State University, Wabash College, Florida State University, and Indiana University. Record/production companies such as Deer Pants Productions, Odd Freak Films, Endongo Records, and Sony BMG have released/commissioned his music.

Kafumbe has received recognitions and research awards, including the Mark and Margery Pabst Charitable Foundation of the Arts Musicology Award and a Carnegie African Diaspora Fellowship that recently took him to University of Jos (Nigeria) to co-design a B.A. music program. He is also an active member of the Society for Ethnomusicology (SEM), the International Council for Traditional Music (ICTM), the African Studies Association (ASA), and the African Theatre Association (AfTA).

Kafumbe will discuss his forthcoming book: Tuning the Kingdom: Kawuugulu Music, Politics, and Storytelling in Buganda on May 3rd-4th at The Middlebury Institute of International Studies at Monterey.

From pre-colonial times through colonialism and into the postcolonial era, the Baganda people have used performances of the Kawuugulu Royal Performance Ensemble to articulate and negotiate a complex, sociopolitical hierarchy that interweaves and balances clan authority with the prerogatives of the king. Crucial to the ensemble and the Kingdom of Buganda is a body of stories that record how or when the ensemble grew in relation to the kingdom’s changing circumstances and guides the ensemble’s performances in contemporary times.

These narratives make it possible for the ensemble to implicitly highlight the individual identities of all clans, implicitly unite these clans by representing them before the king, and explicitly bring the clans together. In doing so, it sustains a social contract that remains alive as long as Kawuggulu performers drum, sing, and dance. Indeed, the ensemble’s performance practice and the stories that inform it are as musical as they are political, as familial as they are social, and as palpable as they are invisible in their consequences and importance. Drawing on ethnographic research and my kin ties to Kawuugulu performers, in this paper I will argue and demonstrate that Kawuugulu performances manipulate sociopolitical tension in the same way they synchronize the complex polyrhythms that shape the ensemble’s music.