Today, I was fortunate to be part of a small gathering led by Ralph Simon, a long-time music industry executive and mobile technology leader.  Mr. Simon came to Hub Bogota to speak with staff and guests about how technology and social media are being used for innovation and social good around the world.  The talk was not only educational and eye-opening, but inspiring as Mr. Simon acknowledged Hub’s own leadership potential, “The Hub is creating a whole new road for Colombia to move forward.” After working at the Hub for over a month now, I think it’s quite easy for the novelty of the Hub atmosphere to wear off; the co-creation meetings, the tables covered in scratch paper – to jot down ideas whenever they arise, the ability to suggest virtually any idea without getting an open-mouthed stare.  It was a refreshing to have Mr. Simon remind us that the Hub is a special place – one that you do not come upon everyday.  A work environment that thrives on innovation and change, and works to make ideas come alive. As Mr. Simon said, “Innovation is everything because nothing stands still.”  Innovation is not about creating something completely new, but rather about transforming something existing into something  better and fresh.  The sad truth however, is that most firms are not excited by innovative ideas, and do not want to take a chance on something new.  Unfortunately “naysaying” is the norm and until we can break that paradigm, innovative thinking will be considered too risky for the average company.  My director here at the Hub, Paula Gutierrez, raised a good point as we were wrapping up our session; the Hub atmosphere is a space for open innovation, imagination and idea creation, “How can we make this space visible to the public?”  How can we get the community engaged in this open thinking to make real and lasting changes? Anyone who knows me, knows that I am a patriot.  I love America.  Don’t get me wrong, I love traveling the world, being introduced to new cultures and food, but I always love coming home.  Obviously, I know that my country has it’s many, many problems, but I still love it.  Well, one thing I LOVE about Colombia, is most everyone I’ve met here is a Colombian patriot.  They love their country, the way that I love mine.  And there is such a rich, indigenous history, of which there are still many artifacts. These pictures are of artifacts taken at the Museo del Oro (Museum of Gold) in Bogota.  Colombia has taken good care of the artifacts, and the museum is curated very well, and is quite beautiful.  The best part is that it is free on Sundays, which is great for both tourists and locals.  In fact, the great majority of visitors to the museum are Colombians, curious to learn more about their historic past.  It’s beautiful to see both small children and adults excited to learn about their history and I wish I saw that same excitement in my countrymen. Not only do Colombians seem to relish learning about their history, but as well, are emotional when speaking about the future of the country.  A common sentiment here is, “The war is now over, but we still have not won our independence.”  Those of you that know your Colombian history may be confused by this statement, since Colombian won it’s official independence in 1824, and the world has yet to acknowledge that Colombian has been in a civil war for the last 50 years, calling it rather an “armed conflict.”  In Colombian reality, the country was in a war, and the country has now experienced a period of peace they haven’t seen for 30 years. With this new found liberty and freedom, there is also a movement (especially among the youth) that Colombians are ready to begin investing again in their country.  The daily threats of robbery, kidnapping, and violence is all but gone, and so the people of Colombia are ready and excited to rebuild.  You can clearly see the entrepreneurial spirit alive in the country and this, I believe, is going to lead Colombia into a new “golden age.” Working at the Hub has been great.  I have been working with a Colombian and another American colleague in strengthening the support services that the Hub offers to its entrepreneurs; we have called these groups “catalizadores del cambio” (or catalysts of change).  In the last 2 weeks we have set up meetings with Graphic Designers and publicists, lawyers and accountants to put together a brochure of services that can be offered for those working in the Hub.

The meetings were a great way to showcase not just the Hub itself to a greater audience, but also how programs are developed.  In the meetings, we asked the professionals of individual fields in attendance to co-work to create the program with us.  It has been really great to see people who had not met previously to come out of their shell and work together to create a project. These meetings are co-run with a Hub host.

The Art of Hosting is a central concept to making the Hub network work.  The host of the house not only welcomes entrepreneurs to the working space, but also creates opportunities for networking and brings innovators together to work on similar projects.  We will also rely on the hosts to assist in selling the services that we are currently developing with the designers, lawyers and accountants.

Working at the Hub has definitely given me a new view on co-working and co-creation.  It can be a slow process and sometimes painful, but the product that is birthed from the co-creation is generally one that pleases everyone in the organization and one that is fully developed.  I plan on bringing these lessons back to my group projects at MIIS for sure!  Look out future classmates… uite a bit of graffiti in Bogota.  In fact, pretty much every building is covered in it.  What surprises me about the graffiti in Bogota is that much of it is artwork.  Some of the street artists are commissioned by the building’s owner to spray paint images on the store fronts, and some is simply beautiful vandalism.  But when I see vandals spray painting beautiful murals, my reaction is not What I see is a budding artist community that is just pining for opportunities to show off their work. Indeed, much of the work is beautiful, but there are also many political messages as well. And, some of it is just plain funny. That’s a great question… what exactly am I doing in Bogota?  Well, I’m working at an organization call Hub, which is part of a global Hub Network.  This week, I am helping Hub and Hub partners with their Social Innovation Week.  I wrote a description about the events happening this week in English to provide to partners around the world: Meeting at the Hub, going over the schedule for Social Innovation Week

Social Innovation week is a connection of events across Colombia, creating spaces for social innovators and social entrepreneurs to meet, learn, network and collaborate.

Beginning with an early morning hike, and concluding with “La Cosecha” or the Harvest, the week will combine social events, networking opportunities and educational activities to allow social innovators and organizations to explore and expand their concepts within a community of like-minded individuals from Colombia and abroad.  Events throughout the week include social hours, networking nights, TEDx Makers Talk broadcasts and group bicycling throughout the city, an already popular activity with the trendy, young population of Bogotá.

ProAcción Café, a launching event for Hub Bogota, will feature entrepreneurs co-creating projects and will include participants from the public and private sector and from international and governmental agencies.  The final gala of the week will be the Harvest; an event with more than 100 members will be an opportunity for participants from the week to share collective knowledge gained throughout the activities and make partnerships to bring their ideas to fruition.  In addition to the events planned by the partnering organizations, there are self-generated events occurring across the country, as individuals and organizations are encouraged to create and promote their projects through an Internet platform.

Social entrepreneurship is a growing movement in Colombia and Bogotá is becoming an epicenter of development and sustainability in Latin America.  Stay updated on this week’s events online

This weekend, I finally got out and saw some cultural parts of the city. Even though I was feeling a little under the weather, I went to La Candelaria this Saturday and went to el Museo de Botero and La … Continue reading →

Here are some first impressions of Colombia:

– You hail a bus, but not a taxi. Most of the bus system in Bogota does not have a schedule or stops. You just go down to the major calle or carretera and hail a bus as it is going by. To get off, you just pull the chain to signal you want to stop. I’ve been told, this is why you hold on tight when you’re on the bus, and you never know when the bus will be stopping. You don’t hail taxis because many are fake and will rob you or worse. Instead, you call for a taxi and they text you a secret code number which you you’re your driver when you get inside. For this reason, I purchased a phone for the short time I’m here, feels pretty necessary. And it was only $49,444 COPA ($28)

– Coffee is beyond a pastime, it is a necessity and generally enjoyed at multiple points throughout the day. Traditionally, there used to be men that carried canisters full of coffee through the streets, on their backs like a backpack, and selling coffee this way, but it is far less common than it used to be.

– I learned a new expression that I love: “Esa situacion es un chicharon.” – This situation is a mess! Chicharon is actually a piece of pork meat, which is often sold by street vendors. It is fried and very greasy, so after eating it, you’re a mess from the juices. For this reason, Colombians use the term to describe situations that are messy.

– The safest place to get money out of an ATM is inside a shopping mall, which have plenty of ATMs all over and many security guards. Most shops have a security guard out front as well, but I have been surprised that none of them seem to have weapons of any kind. Not sure exactly who they are trying to keep out.

– General custom when you meet someone is to hug them and put your cheeks together with a whiling kissing the air. Like air guitar, it’s an air cheek kiss. And even when you meet for the first time, people don’t say “hello” but rather “Que tal, como estas?” Tu (the informal you) is very common when you first meet people, which threw me off a little, I’m used to using the formal version until invited to use the informal.

– I have never been to a friendlier place, especially when the locals are dealing with a bumbling American foreigner like myself. I’m constantly amazed at how nice and patient people are with me… of course, a smile goes a long way! 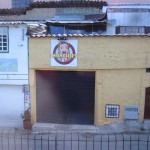 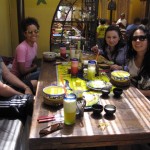 My first lunch in Bogota 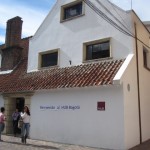 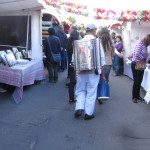 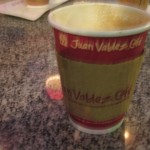