Home » Digital Media » How do I detach audio from a movie clip and add it to another clip in iMovie 09?

How do I detach audio from a movie clip and add it to another clip in iMovie 09?

Step 2: Next, you will need to determine what portion of the audio you’d like to detach and use as a voice over or background audio.  In this example, I have decided that I want to keep the beginning and end of the video clip but take out the middle portion.  You will need to split the clip into three parts that isolates the portion you want to detach as the middle portion.

Place the mouse over the exact point where you want to split the clip. Then push the control key on the keyboard and then click with the mouse to activate the menu. Select “Split Clip” to chop the clip in half.

Step 3:  Now that I have split my clip into two pieces, I will need to split the clip again at the end of the audio that I’d like to use as a voice over or background audio.

Step 4:  Now that you have split your clip into three smaller clips, you will need to rearrange the clips in your project into the order that you’d like them to appear.  In this example I have dragged the map animations to play just after the first clip because I want them to play when I am talking about where I went over the summer. Step 5:  Now that you have your clips arranged in the order that you want them to appear, it’s time to detatch the audio from the “split clip” in the image above.  Select the split clip by clicking on it once, when you have selected it a yellow box will highlight the clip.  Next you will need to hold down the “control button” and click the mouse to activate the menu.  This time you will need to select “detach audio”. Once you have succesfully detached your audio, a purple bar will appear below the clip. 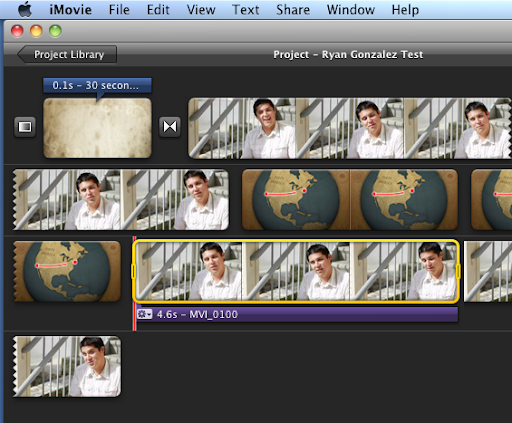 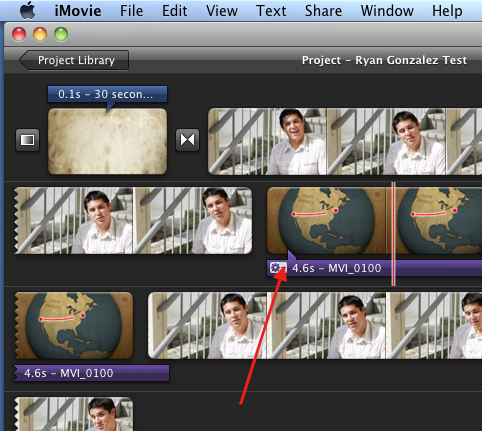 Step 7:  Now that you have the audio clip attached as a voiceover or background audio to a new video clip, it’s time to delete the video clip from where the audio was detached from.  Click on the clip to select it and use the control + click feature to activate the menu and “delete selection”. 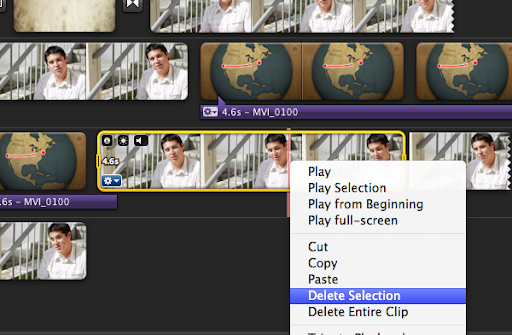 The image below is what your project should look like after you have successfully detached your audio and attached it to another clip as a voiceover or background audio!