Last Friday the IUCN invited me to attend a day of regional meetings for the Convention on Biological Diversity (CBD) which was comprised mostly of government officials from ministries of environment and finance. The purpose of the meetings, that had been going on all week, was to report on progress and collaborate on new ideas as to how to complete their commitments to the 2020 targets that the treaty has set. The meetings took place in a beautiful state department building. In the morning the topic was communication and Ana Puyol of TRAFFIC gave a great presentation on how to effectively relay the message of biodiversity loss to the public. She showed a little video called “Love not Loss,” which I recommend. It is short and motivational. She spoke about creating networks of communication and the importance of being strategical in conveying messages.

In South America, often it is communicating with the right people to make big changes that really counts, such as incentivizing government officials to bring their families to parks and enjoy the surroundings so they feel more inclined to protect important areas. Economic arguments are huge and there is a pretty big push to better incorporate ecosystem valuation into decisions, yet it remains exteremly controversial for certain countries. After the presentation, we were given group work and I was able to participate with a Bolivian indigenous woman, representing the indigenous communities of her country and and official from Ecuador’s Ministery of the Environment. Everyone had extremely interesing  comments on how they feel communication could be improved. For me it was valuable input that I will give me a broad and insightful view on the direction that efforts to  stem biodiversity loss should be heading.

Later, the topic changed to Finances and Chile’s representatives gave a presentation on how their government has been financing its efforts to fulfill their commitments to the CBD. Once again, we were assigned group work and told to brainstorm ideas on how to diversify and increase the amount of funding that the initiatives layed out in their National Strategy Plans receive.  Each country has created a Plan for their CBD commitments. I went into discussion with the representaives from Suriname and Guyana and we came up with some interesting ideas.  For many countires, a huge factor will be techinical assistance and international finance mechanisms. Brazil, for example, has a satellite that they use to monitor their rainforests and to attempt to identify illegal logging. This satellite is ready to expire and the finances may not be there to replace it. Countries such as USA could offer assistance with ther satellites, for instance. One resource that was cited often during the finance talks that I want to share in case anyone is interested was called “The Little Biodiversity Finance Books.”  It includes some interesting research and statistics.

I was pretty stoked that throughout the day, I only had to use to translation headphones one time. That was for the Chilean presentors seeing as they do not pronounce the end of any word and the letter “s” is essentially non existant. There was really good energy in the room and these people are really motivated to make some changes. I left feeling motivated that things were heading in the right direction and hopefully for the next Conference of the Parties, more progress will be reported. 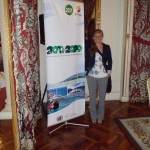 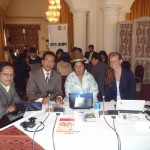 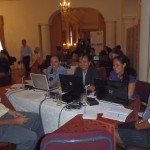