On February 3rd, we had a special visit from Sunglim Kim, a T&I and International Policy MIIS alum. She was kind enough to share her time and experiences with us as a Security Coordination Officer of the Department of Safety and Security of the United Nations. Though Sunglim Kim does not work as a professional translator or interpreter, she explained the significance of language within the UN as well as some tips for those who want to apply for language positions. Additionally, she shared advice about how we might spend our time while at MIIS.

Language is political within the UN. Officials from other countries bring along interpreters not because they cannot understand the language being spoken but because of the political significance of using their own language in such a space. Furthermore, Kim, in her position as a Security Coordination Officer, explained that language is important in the UN because of the following reasons: credibility enhancement when assisting a local population, credibility of information necessary for security reasons in dangerous areas, and crisis management during critical situations.

The UN has six official languages: Arabic, Chinese, English, French, Russian and Spanish. Any language position requires the applicant to have excellent command of two languages and university-level command of one language. Translators and interpreters can only move up to level P4 in the levels of employment at the UN. Unfortunately, people who follow this career path do not have many opportunities to move to different departments since their work is so specialized. However, the demand for translators and interpreters is high in the UN.

Kim’s advice to us as students was to make use of the resources available to us because Monterey is a great location to be studying language and learning about the world. Personally, she said that the various seminars she actively attended opened her horizons in directions that she had not considered.

At the end of the talk, we had a short Q&A session (this was all in Korean):

Sunglim Kim ended her talk with an anecdote. She said that she used to work under a French director at the UN who enjoyed making impromptu visits to nearby events. They once dropped in on a press conference where the director knew little about the subject being discussed. However, the director listened carefully and even asked a question before leaving. As they left the room, the director said, “Through my question, I’ve made friends with the speaker and with everyone in the audience.” Kim left us with the advice to try to leave our footprint and make an impact wherever we go.

Kim’s talk was quite informative and eye opening for many of us. It is always wonderful when an alum visits to share their time and experiences with us! 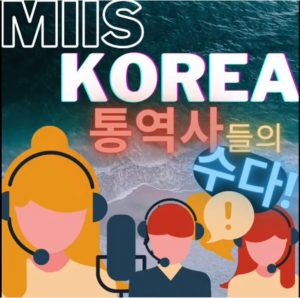