Having snorkeled the Nahtik Marine Protected Area and having navigated the Enipein Mangrove Reserve, exploration of the Watershed Rainforest Reserve was the last step required to complete my tour of the three conservation sites included in my Ridge-to-Reef management plan for the Woun Kepin Soamwaoi Nature Conservancy. I had heard talk of an area in the upper jungle called 6 Waterfalls and I desperately wanted to go. After being asked if I had been hiking before and if I was sure I wanted to go for the hundredth time, I finally received reluctant approval from my host-father to go. I set out into the jungle with a group of local young men as tour guides and my two roommates who I had dragged with me. They peered at me with unenthusiastic eyes as I excitedly bounced along in the back seat of the car on our bumpy ride to the trailhead a far ways up the mountain. We only made it halfway up the road before our car got stuck in a mudslide and could not make it up the steep incline without helplessly spinning its tires. We all hopped out and started our hike a bit earlier than expected as our driver waved goodbye and reversed back down the mountain. Eventually we made it to the trailhead, though I wouldn’t have recognized it as such. We followed a small muddy trail into the jungle for about a mile until it started fading into the rotting leaves, vines and overgrowth of the jungle floor. We stopped for a brief moment while the tour guides pulled out their machetes, and then continued on, hacking our way through the dense forest. The jungle is unpredictable and unlike anything I have ever experienced before. All of the training I had received from countless hiking and backpacking trips through the North American wilderness left me utterly helpless in the rainforest. The rocks that I attempted to stand on for stability were slick as black ice, covered in a deceiving clear slime. The roots I used to secure my footing on the steep downhill climbs were flimsy and rubbery, bending at the slightest pressure, sending me sliding down the muddy slopes of the jungle, much to the entertainment of everyone around me. The vines I clung to in attempt to heave myself up the treacherous rock cliffs were covered in small spikes leaving my stinging hands grateful to be on flat ground as I inhaled deeply on all fours in an endeavor to regain normal breathing. The smell of the jungle is overwhelming, as the scent of tropical flowers, rain, and the musk of damp trees combine to form a fragrance so humid and heavy it seems almost tangible. The jungle floor, a soggy compilation of leaves, ivy, moss, rotting unknowns, and mud clings to your feet, threatening to drag you down with every step. Covered in mud, we reach the river clearing, and I am rejuvenated by the anticipation of seeing waterfalls, believing that we must be close now, disheartened to learn that we are not even halfway yet. The rest of our voyage is spent swimming, crawling, slipping, and fighting upstream against the unyielding current. I am struggling to keep up with the locals, while striving to preserve whatever positive perception Micronesian’s might have of Americans, and determined to not get left behind, I clamber up the riverbed after them. I suppress the familiar sensation of frustration and anger creeping through me as I continue to trudge on, tripping over my feet, and repressing flash backs of earlier days spent trying to keep up with my two older brothers. Most of the locals I am with are younger than I am and I can’t help but wonder if this is what parenthood is like. I’m older, yet still behind and still straining to keep up. Finally I hear it. I can feel the wind and the coolness of rushing water. We are close. Upon our arrival at the first waterfall, all doubt is washed away by the sheer power of the cascading water before me. I absorb the overwhelming beauty of the waterfall, showered by mist and illuminated by fractured beams of sunlight streaming in through the leaves of the lush canopy above. The mist-filtered light creates fleeting rainbows and emanates a spectral aura, giving the waterfall and its surroundings the appearance of ethereal solitude. It is a spectacular sight, enough to dominate your senses and leave you breathless. The rush of the water reverberates off of the rocks, roaring in my ears. The serenity of the deep pool at its base is calming and remains relatively undisturbed despite the shattering of water from far above. Each subsequent waterfall is increasingly impressive. The 6th and final one is magnificent with infinite gallons of crystal clear water flooding from the mouth of an open cavern shaped like a heart, chiseled into the rocky mountaintop. On our hike out we take a “short-cut” back to the road, which made the trip in look like a walk in the park. I continue to feel like a character from the Jungle Book, if Mogli had an uncoordinated, out of shape, pale friend who he had kept a secret due to embarrassment. While traversing a slippery fallen log 20 feet above the jungle floor, my mothers voice resonates in my head “better safe than sorry,” as I cautiously place each foot in front of the other, fully aware of the jungle traffic jam I have caused. With my sticky and knotted hair in my eyes and clinging to my face, I silently curse myself for taking it down for that “shower” picture underneath the waterfall. Not worth it. Eventually we find our way back to the original trail and I emerge covered in mud, happy to be alive with only a few minor injuries to show for being chewed up and spat out by the jungle. My host-father reveled in my inability to move for the following week, chuckling as he walked by me mumbling, “I told you so.” Never again will I underestimate the efforts of hiking, living or exploring in the jungle. I am again reassured of my decision to focus my graduate studies on the ocean. 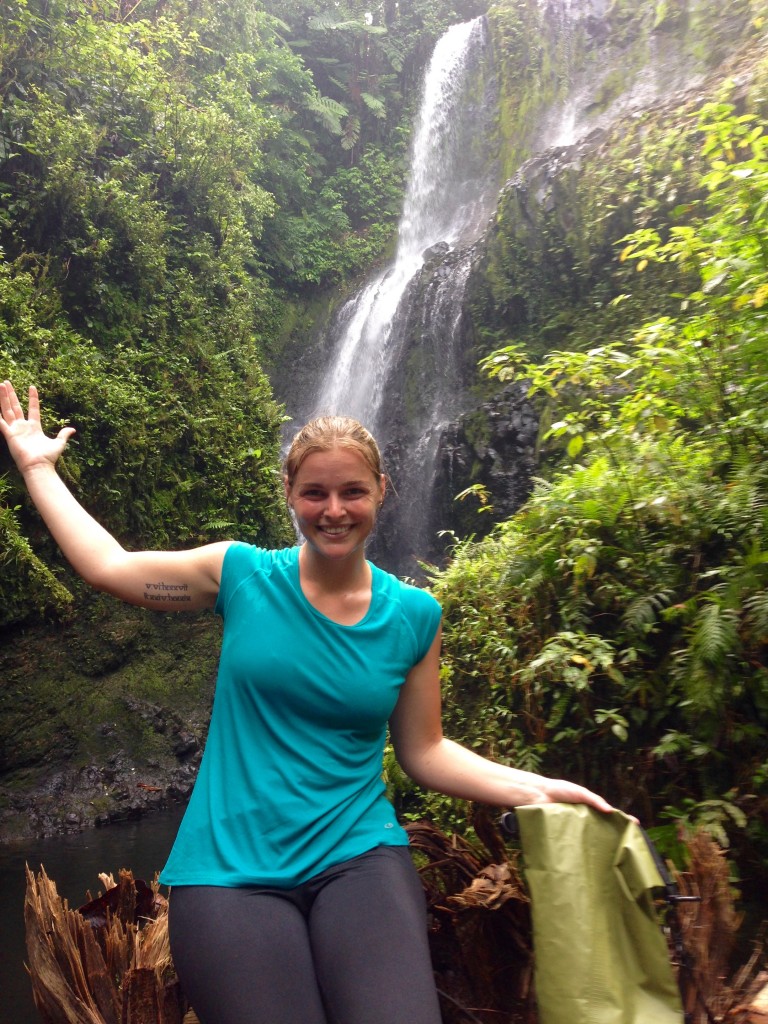