Let’s save the world!

To say the first day of the program was intense would be an understatement. Although a lot of the day was grounded in theoretic frameworks of conflict, so much of the discussion we had was centered around reflexivity, emotion and relationships. We can’t “solve” the conflicts of the world if we don’t resolve the battles we face internally. I loved that we started off the program by discussing our own positionality, complicity and even intentionality with the work we want to do, now and for the rest of our lives. For me, this has always been a big challenge. I grew up in Mumbai, but unlike most of the city’s population, I was afforded a large set of privileges that determined so much of my own success. As a middle-class family, my parents worked very hard to send my sister and I to good schools throughout our lives. I spoke English at home, I went to a UWC, I went to the United States for college, I have traveled to over 32 countries – this reeks of privilege; it is an exception, not the norm. Even among our particular social strata, my family is different. They are open-minded, understanding and accepting; we have a strong, trusting and respectful relationship. I am able to talk to them freely about whatever I want. I never had curfews or protective parents like the rest of my friends did. Of course, I was still a woman of colour living in a patriarchal world, and when I came to the US the conversations about privilege were more complicated.

But the elephant in the room was always the “saviour complex” conversation – what is my place in the fight for human rights? Whose voices was I amplifying? Whose anger was I embodying? Who was I speaking for, or speaking with? I cannot begin a journey of human rights change and peacebuilding without first acknowledging where I stand. Our discussions in class spoke to these questions – we talked about being a bystander, a witness, the responsibility of someone on the outside, capable of doing something, to do the best they can. 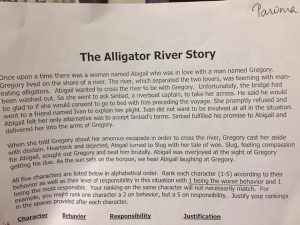 Ivan from the Alligator story (pictured above) during Jill Stoffer’s session was a character least liked by most of the groups for his non-intervention. Yet we are quick to judge those who do do something, but perhaps incorrectly or ineffectively – like Slug, whose form of intervention meant beating up the bad guy. As peacebuilders, or advocates, or human rights activists – we should certainly not be the Ivans of the world who watch by as conflicts happen when we have the tools to do something. But we must also not be the Slugs who enthusiastically dive in headfirst to a “let’s save the world” project without any deep understanding of the conflict, its history, or its people – and end up doing more harm than good. A friend once told me she thought of privilege and identity as physical spaces – the more privileged you are, the more space you take up in any given situation. The point, especially when fighting against injustice, oppression and suffering, was to recognize your place, respectfully refrain from dominating a moment that can be quite liberating for someone else, and give credit where it is due.

The way our discussion unfolded, the dynamics within the group and the weight of our words pointed to the intersection of these spaces and really the way we reconcile diverging worldviews. Perhaps that is what draws me so much to film and media as a way of observing the world, telling stories truthfully and respectfully, spreading awareness without preaching, and straying away from a vested ideological agenda. (Again, this is an incredibly subjective claim). Watching Parzania was a highlight of my day for this reason; it showed me once again the emotional power a film can have – both in how it heals or provides an outlet for grief to the family that was affected, but also in how it shapes our understanding of the world – how it humanizes conflict (as Yondeen mentioned in class) and reminds us that humanity ought to come before any political or economic gain.