Can you guess how many SolSources are loaded onto this truck? The first large order of SolSource S1 solar cookers were manufactured, boxed, loaded, and shipped to western China last week. This was a great feat for One Earth Designs and a wonderful moment for the whole team – especially the product development and engineering teams who worked tirelessly to make it happen down the stretch. Many more orders like this to come!

I think I joined One Earth Designs at just the right time.

There’s lots of exciting things going on here. We have a new team member – Clement Lam – who will be the Chief of Business Development. Clement is a seasoned professional at ramping up sales and getting companies to lift off the ground once they have a great product to sell.  He also invented the scroll wheel for the mouse, so he’s definitely tech-savy. A native of Hong Kong and a regular of the Bay Area in California, he loves the SolSource and what it can do for people around the world. And he’s a fun-spirited fellow who’s an absolute blast to grab a drink with and delve into a fascinating conversation about technology and the human condition.

Another good thing is that we’ve had plenty of interest from organizations that would like to distribute the SolSource in countries like China, Nepal, Bhutan, India, Mongolia, Indonesia, Mexico, Guatemala, and Zimbabwe, just to name some current ones off the top of my head. Clement has been spearheading these efforts to develop business relationships and I’ve been shadowing his lead, helping him look at pricing tables, and just generally bouncing ideas back and forth. The interest we’ve received for the SolSource is terrific and to capitalize on that we’ve got important work to do to make these deals happen.

This is a crucial time for the company because we want to gain solid market traction, but we also believe it’s imperative to build a strong, meaningful reputation amongst our end-users and the international solar cooking community. This means that we maintain our focus and stick to our regions of strength. Success can be defined in so many different ways. At OED, we want to get the SolSource into the hands of rural families who need it most, while demonstrating that we can operate effectively on all fronts.

This is the unique perspective that I’ve been offered, and that’s why I feel so fortunate to have joined right now. Last week the design team brought me along with them to visit a factory in Shenzhen, which is just over the border in China. At this particular factory, our SolSource solar cooker is assembled. This was an enlightening experience that allowed me to see first-hand “how the sausage is made.” Two photos below show Sloan, Maggie and Tin very focused on ensuring quality control.

Scot and Erica are currently attending SOCAP (Social Capital Markets – the preeminent conference for social enterprises and impact investors, held in San Francisco each fall) to represent One Earth Designs and meet with people in the industry. More on that event next week! Today on Skype I met with Gina, a promising high school senior who will be rejoining our team remotely. Over the next month or two, Gina and I will be researching the concentrated solar power market to analyze growth prospects and better understand it’s evolution in China.

This was a shorter work week to recognize the Mid-Autumn Festival, a widely celebrated holiday in China, Hong Kong, and Vietnam. Earlier in the week I ventured over to Victoria Park in downtown HK to check out the carnival grounds. What an electric gathering! Literally. There’s a magnificent structure that’s been constructed just for the week-long festivities. It’s called the Golden Moon, because the moon plays a large role in the meaning of this holiday. Standing at 6-storeys high and partially submerged in a shallow pond, it sporadically gives a neat light show.

I also traveled to some surrounding regions of Hong Kong. By ferry I cruised across busy shipping lanes to Lantou Island. From there, I took a bus which wound it’s way around the island and through the jungle to an old monastery, where a famous “Big Buddha” sits atop the hill. The Big Buddha is a spiritual place for all people of the Buddhist faith to visit and pay their respects. I was just excited to find a little adventure again. 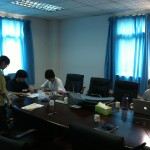 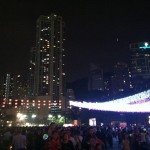 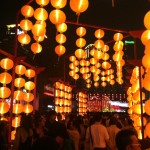 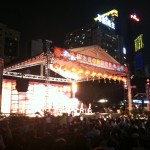 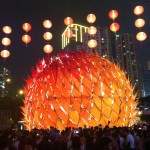 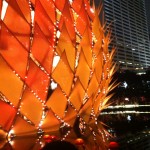 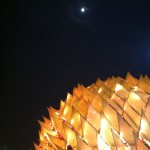 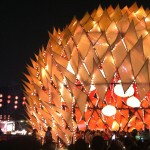 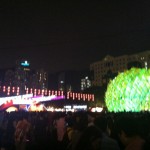 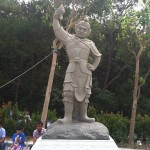 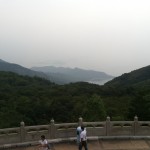 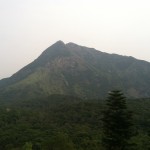 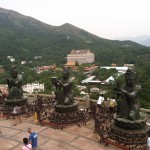 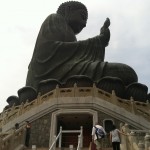 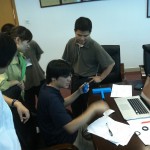 (BBC cameraman gets the SolSource into focus.)

One Earth Designs and Village Capital were both featured by the BBC in an article about social entrepreneurship…..Check it out!

Social entrepreneurship takes off in China

Thank you BBC for spreading the word! 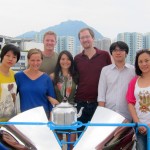 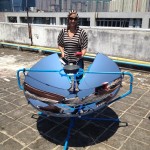 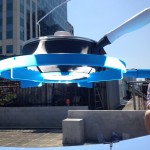 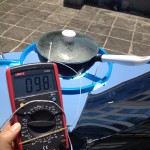 Many villagers in rural communities rely on solid fuels like coal, dung, and wood to cook their food. Most of the time this is done indoors, which leads to millions of deaths around the globe every year because of constant smoke inhalation.

The SolSource is a solar cooker. One Earth Designs has been perfecting this product for several years. Previous versions are currently being used all over the Qinghai-Tibetan Plateau, which is actually the sunniest place in China. The latest model (pictured above) is a very simple and elegant design that’s safe, efficient, and convenient to carry/assemble/use.

Monday was a clear, sunny day in Hong Kong, so the team decided to take the SolSource up to the roof of our building and run a few tests! The SolSource boiled water in just 10 minutes, reaching a maximum temperature of 98-99 degrees Celsius. Since it was close to lunchtime, we thought it wouldn’t hurt to scramble a few eggs as well.

This was my first time observing the SolSource in action. I could tell that the team was really proud of it’s performance. I’m excited to work alongside and learn from such a passionate group of professionals. With the SolSource and other projects, I’m confident that One Earth Designs is going to impact so many lives in the Himalayan region and beyond.

Hello friends. Thank you for tuning in, this is my first blog post. Over the next few months I will be detailing my experiences abroad while working in the social impact space. I’ve decided to begin with a quote:

“Twenty years from now you will be more disappointed by the things you didn’t do than by the ones you did do. So throw off the bowlines, sail away from the safe harbor. Catch the trade winds in your sails. Explore. Dream. Discover.”  – Mark Twain

After traveling around China for six weeks, it feels good to finally find my footing in Hong Kong. What an incredible city! With the help of Village Capital, the Monterey Institute of International Studies, and Sanghata Global, I’ve been connected with a company. Tomorrow morning I’ll be starting work at One Earth Designs. I’m very excited to meet the team and contribute to what they’re doing for communities across the Himalayan region. If you get a chance, definitely check out their website…

I plan on making a post at least once a week. Please feel free to share any questions or comments that you may have.

A special note: September 11th is coming to a close for me in the China time zone, so I want to say that today my thoughts were with those who tragically suffered eleven years ago from evil terrorist attacks against the United States of America, and more broadly the freedoms that many people enjoy around the world. Some wounds have begun to heal, but our nation will never forget what happened that day.