School has started here in Melbourne and I have come back to reality, I am in student mode again. Yesterday was my first day of classes, consisting of Zoology and Sociology lectures. My Sociology “lecturer” (professor) made a point of calling out all the international exchange students and questioning us about the sociological differences between our home country and Australia. Unfortunately, I was the only foreign in my class and ended up being the center of many of the topics covered that day, and I’m assuming the center of many topics to come. Today I had my Cellular and Molecular Biology lecture, my Aboriginal Australian Studies “tutorial” (discussion group), and then my 3 hour Microbiology “practical” (lab). It has been a bit tricky getting a hold of all of the Australian university lingo. There are no majors here but instead there are “subjects.” Just as there are no classes, but rather courses. Mixing up the two will result in bizarre looks from the other students with whom you are trying to befriend. A nice girl in my biology lab, I mean practical, sat next to me and asked what my “subject” was. Assuming that she meant what classes that I am taking, I replied Sociology, Zoology, Biology and Aboriginal Studies. She looked at me to see if I was joking and then quite seriously said, “How ever will you graduate?” It took me a while to realize that she must have been asking for my major and not my class schedule, but by then she had already found a new lab partner… 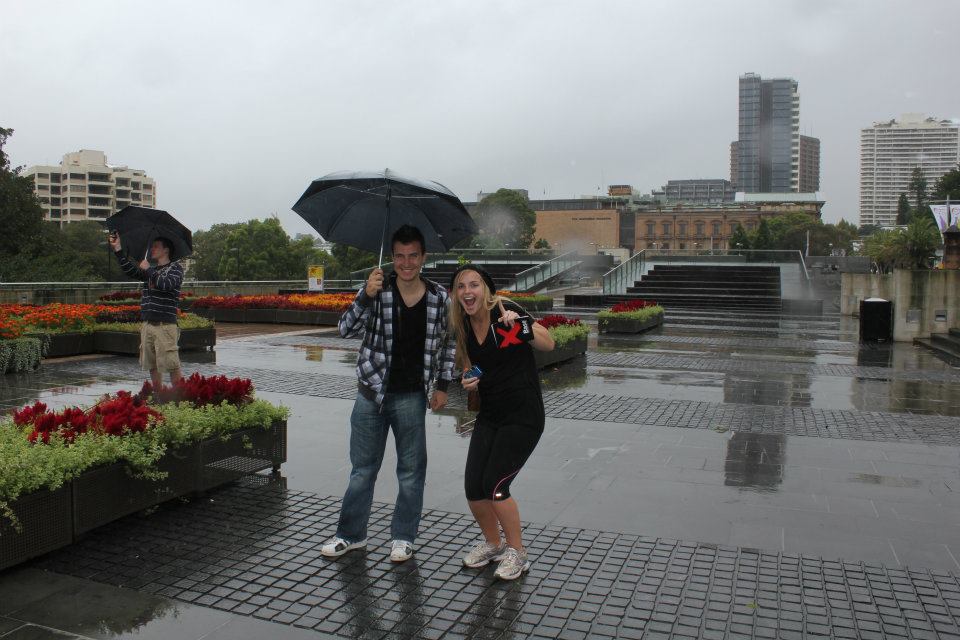 The weather has been mirroring the spirits of the students here as it has been pouring rain ever since school started on Monday morning. I found it rather entertaining watching my professor, I mean lecturer, try to compete with the booming thunder that echoed through our auditorium. As I left class it began to pour buckets and I was stuck because I had no jacket (since it was a tropical storm and still 80 degrees out) but was wearing a white tee shirt…I considered using my notebook as a shield but thought better of it when I remembered the price that I had paid for it, so instead I made a run for it. I arrived back at my dorm dripping wet from the rain, dripping sweat from the run, and overall sticky from the humidity. I decided that a shower would be best since I was already drenched and walked down the hallway to our communal bathroom. I was halfway in the shower when I saw them… A very large cricket and the Huntsmen spider (3 inches in diameter and venomous, but not enough to kill you), both very common in Australia. They must have been hiding from the torrential down pour as well, only to have me turn it on again inside. I quickly stepped out of the shower to concoct a plan. Going anywhere near the spider was a definite no, but my compassion overcame me as I watched the cricket struggling to swim in the whirlpool I had created. As I bent down to scoop him up from the shower drain, I had a flash back to the last time I tried to save an Australian creature from a swimming pool, which I later found out to be the poisonous Cane Toad.  For precautions sake, I wrapped my towel around myself and sprinted down the hall to my dorm and quickly logged onto my computer, searched “poisonous crickets of Australia,” found no hits on this insect and then bounded back down the hall where I proceeded to scoop up the harmless little insect and place him outside. I then took my shower and kept my eyes open and glued to the giant, hairy, scary spider on the wall beside me. Since I have been here in Australia, many times I have been overwhelmed by the feeling that I am living in a prehistoric land, a world like Jurassic Park. 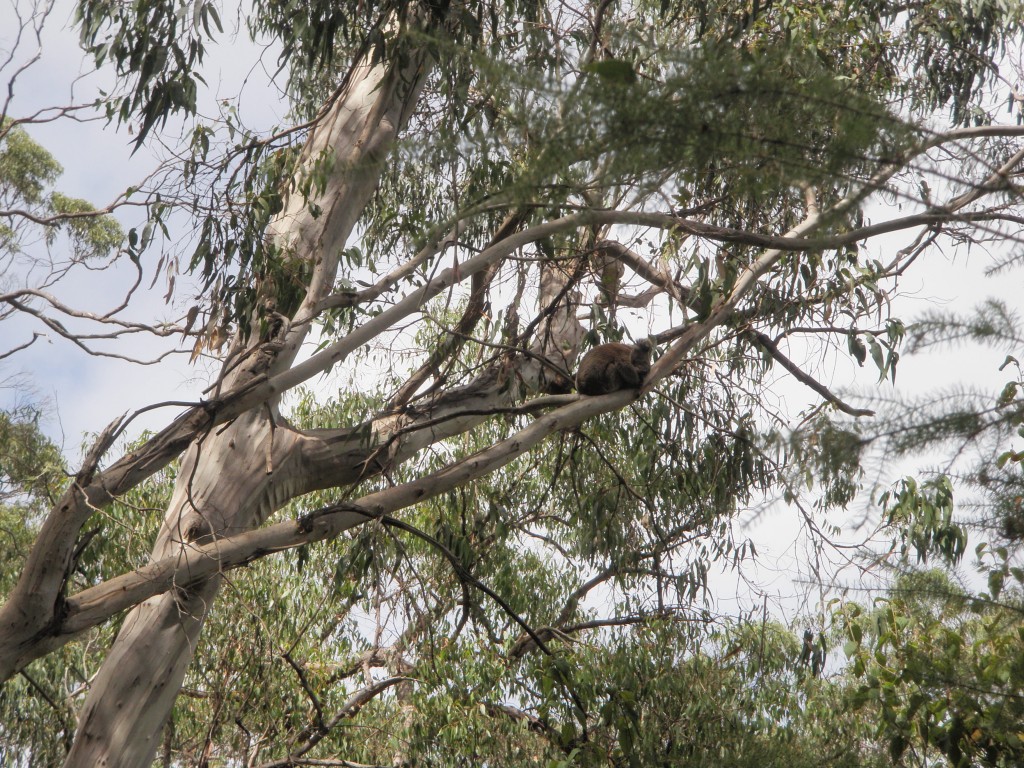 Lots of factors play a part in depicting this world. The weather for one, humid and sticky, or scorching and dry, with unforeseen tropical thunderstorms, and upwards of 100 degree temperatures. The insects and spiders for another. As I lay in bed each night I can hear an orchestra of sounds from unidentifiable creatures lofting through my window. And when I awake each morning, my ears are greeted by the indistinguishable songs of the many birds that occupy my campus. The bird life in itself is enough to make you believe you are living during the Jurassic period. The yellow cockatoos, that people have as pets back home, can be seen flying wildly everywhere. And the bright green, red and blue colored lorikeets fly freely about the campus as well. The mocking birds here are not colored with defined strokes of symmetric black and white but instead with rather random splotches of white and black that fit together like puzzle pieces. There is a weird looking grey, yellow and white bird which prefers to run than to fly and can be found scurrying about all over the place. Add this to the snakes, lizards, frogs, kangaroos, wombats, and koalas and you’ll believe that you’ve gone to another world. Despite the midnight panic attacks when you wake up to something crawling across your face, or the uncomfortable showers spent with one eye scanning the walls and ceiling, this new world is quite a fascinating place to live. 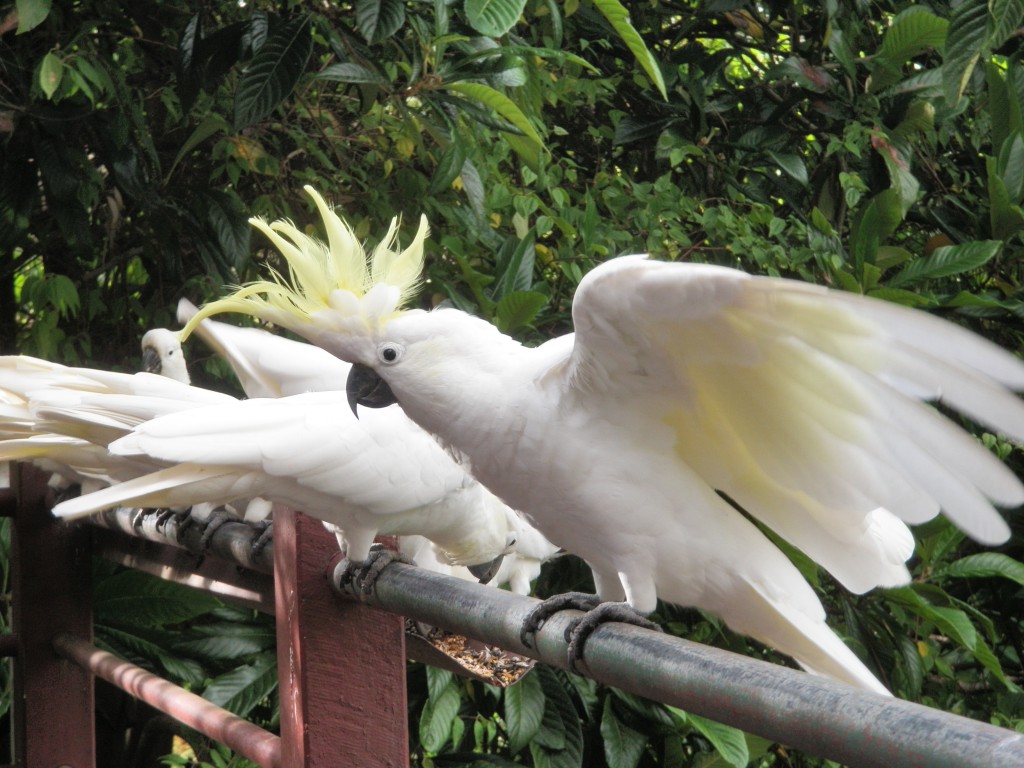