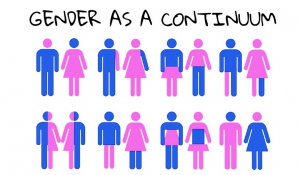 Dr. Sunjata Moorti came in to speak with us about the role of gender, specifically, as it relates to peace and conflict. She had us introduce ourselves with a bit about our relation to gender, and it caused me to think back to my senior year of high school where I put together a final presentation on gender roles for my favorite class (one that fused language arts and social studies for all 4 years within a community where freshman, sophomores, juniors, and seniors were all mixed in classes together). I highlighted several advertisements that reinforced ideas that boys should be builders, loud, rambunctious, and like things like guns and cars, while girls had toys that almost always tied to motherhood (e.g. baby dolls, my little pony, etc.) or life in the domestic sphere (e.g. easy-bake ovens). I chose this topic because I am (and was then) a feminist, and I strongly rejected the notion that gender was a binary and static. As I really developed an understanding of in my undergraduate career, gender is on a continuum and fluid. This means that everyone has traits that would fall into the categories of “masculine” and “feminine,” and no one is a perfect image of one of the two, and it also means that ones conceptualization of gender changes over time and with new experiences. This doesn’t mean that everyone “changes” genders, but rather that their gender will mean (slightly or significantly) different things, and could be expressed very differently throughout one’s lifetime. In thinking of gender, I also remembered the strong influence I gained from an inspirational feminist to me, Kimberlé Crenshaw, who coined the term “intersectionality” to describe the interconnected nature of various aspects of our identities (e.g. race, gender, sexuality, etc.). Since coming into contact with Crenshaw’s work, I have internalized this concept and applied it as a lens to view the world, especially in my work promoting social justice. As we discussed in class, this concept was also crucial to the 3rd wave of feminism in the US from the 1980s-2000s, which recognized that there is not singular category woman, and that intersections of all aspects of one’s identity shape their notion of “woman.” 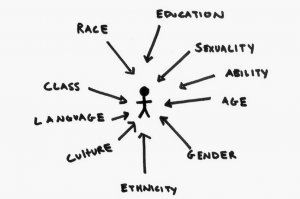 Development also had different stages of how it addressed “the woman question,” beginning by focusing on women as mothers through fertility control and maternal health,  moving into a focus on economic empowerment and income generation, then a recognition that changes in women’s lives also affect men (moving from focus on “women” to focus on “gender”), and finally a focus on girls, with education being the primary method of “delivering equality” under a neoliberal framework. I enjoyed our discussion of how feminists put human rights as a central tenet of peacebuilding, and focus on transformative justice over restorative justice. I had been familiar with the differences between retributive and restorative justice before, but I am now more partial to using the term transformative after asking “what are we restoring? and should we be restoring that?” This matches perfectly with the differences between conflict management (like retributive justice), conflict resolution (like restorative justice), and conflict transformation (like transformative justice); the whole idea of seeing a conflict as an opportunity to change unjust structures and systems of power means that you are seeking transformation, rather than an easing of tensions and violence (management) or end to the particular conflict without a change in the structures that caused it (resolution).