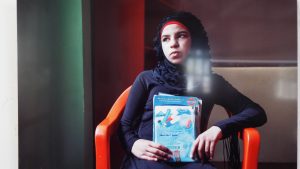 Halaa, 14, had been living as a refugee for more than a year at the time this photo was taken. Devastated by the loss of her father and brother, who died in the Syrian war, she holds her father’s notebook. “The were my father’s notebooks for his carpentry business. He was illiterate. He trusted me and my older sister to keep track of the business records. He wouldn’t let anyone else touch the notebook, not even my brother. The notebooks are the only material items we have as memories of my father.” -Mafraq, Jordan.