Students and teachers from 12 U.S. high schools and 10 schools in Russia’s “closed nuclear cities” met together at the 2010 conference of the Critical Issues Forum (CIF) held April 22-23 in Monterey. This year’s conference, the largest since the program began at CNS in 1998, welcomed over 100 participants including 70 students, 30 teachers, and four new high schools from the East Coast, Midwest and Southern California. The topic of this year’s CIF program, “Nuclear Nonproliferation: Global Opportunities and Regional Challenges” reflected the rapid pace of developments in nuclear security over the past few months. Presentations given by students at the conference reflected fresh perspectives on the U.S. Nuclear Posture Review, the NewSTART treaty, the Nuclear Security Summit, and the upcoming Nuclear Non-Proliferation Treaty (NPT) Review Conference. The 2009-2010 CIF program began with a teachers’ workshop held at CNS in November 2009. Each participating school then submitted two papers responding to this year’s curriculum benchmarks, which included the basics of nuclear weapons technology, an overview of the current status of nuclear weapons in the world, international efforts to prevent nuclear proliferation of nuclear weapons, and other nonproliferation and disarmament efforts. Russian teachers received additional training from CNS experts and leading Russian specialists in a January 2010 workshop in Novouralsk, Russia. Funding for this year’s CIF program was provided by the U.S. Department of Energy and the Ford Foundation.

While all the students studied nonproliferation issues under the same topic, each school presented their findings in projects that highlighted each school’s unique perspectives and ideas for responding to the global challenge of nuclear nonproliferation.

One of the veteran schools, Orinda Academy from Orinda, California, brought an entire class to present on the nuclear arsenals of states both inside and outside the NPT and analyzed the effectiveness of the NPT process. Orinda Academy also hosted students and teachers from Zelenogorsk and Novouralsk at the school one day prior to the conference to further their cultural exchanges.

Linguistic Gymnasium #164 from Zelenogorsk, Russia focused on the important roles of civil society and nongovernmental organizations (NGO) in promoting nonproliferation, interviewing over 16 leading NGOs all over the world and analyzed how NGOs have contributed to progress in nonproliferation and disarmament. School #125 from Snezhinsk presented both historical and technical aspects of nuclear weapons. During the semester, in the process of preparing the presentation, students working on the CIF program at this school visited each classroom at the school to discuss nuclear disarmament and nonproliferation, involving almost all the students at the school in an effort to raise their awareness on this issue. The school also conducted an art competition with a theme of nuclear nonproliferation and disarmament. The Snezhinsk students brought artwork from their school to the CIF conference to illuminate their hope for a world without nuclear weapons.

Dr. Patricia Lewis, Deputy Director and Scientist-in-Residence at CNS, gave the keynote address at the conference. In her speech, “Life at 40: A New Chance for the NPT?” Dr. Lewis highlighted the success and failure of the NPT during the past 40 years, challenges currently facing the treaty, and future prospects for the NPT and other agreements on nuclear nonproliferation and disarmament. A lively question and answer session with the students followed.

This year’s CIF spring conference again included a panel of Monterey Institute students specializing in nonproliferation and recent graduates of MIIS currently working at CNS sharing their experiences and stories on why they decided on careers in nonproliferation. Jessica Varnum, who graduated in spring 2008 with a specialization in nonproliferation studies and currently works as research associate at CNS, moderated the panel and encouraged students to continue studying nuclear security issues, and to become a part of the solution to the proliferation problem. She also emphasized the importance of pursuing your goals with passion and the individual’s power to make a difference for a safer and more secure world.

CNS students also advised high school participants on how to achieve success in applying to colleges and universities. Nikita Perfilyev, an MIIS nonproliferation student interning at the United Nations Office for Disarmament Affairs in New York, joined the panel through the Skype to share his experience preparing for the upcoming NPT Review Conference. His experience as an international student from Russia was particularly encouraging to Russian high school students.

All the participating CIF students have worked very hard under the guidance of their teachers to assess the progress that has been made and the work that remains to be done to achieve the goal of a world free of nuclear weapons that President Obama envisioned in his April 2009 speech in Prague. This vision can only be realized if young people continue and accelerate the disarmament and nonproliferation momentum now underway. The students and teachers participating in the 2010 CIF conference generated new hope and new ideas for progress toward a safer and more secure world. 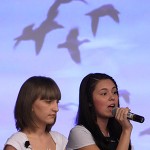 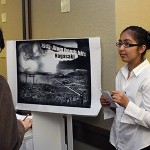 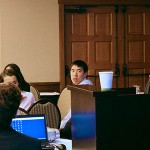 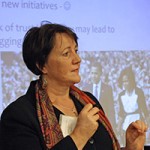 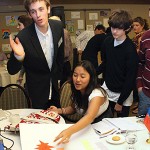 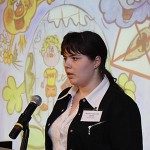 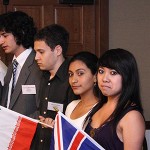 Orinda Academy participants with a flag of nuclear weapons states 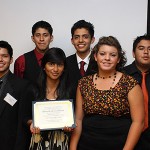 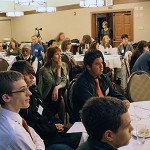 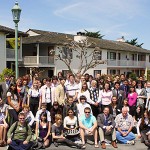 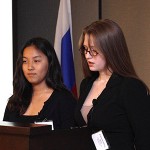 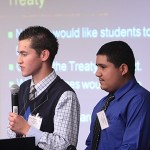 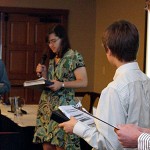 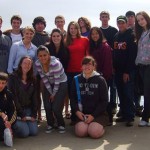 U.S. and Russian students at the Monterey Bay Aquarium